Oh boy this is it!! My first wine review on my own personal blog. To say I'm excited but nervous would be completely accurate. How will you, the reader(s) react? Some quick explanations might be in order. First off, I bought this wine at San Diego Wine Company. Second, I'm a big big Spanish wine fan. I absolutely LOVE the Juan Gil stuff, and will drink basically anything from Jumilla or Priorat. That might give impressions of bias but I'm trying my best to be objective. Last, I'm in no way a professional, as if you couldn't already tell. This is just my impressions of a wine I bought with my own money to enjoy.


So on to the good stuff. I am testing out various ways of ratings but right now kind of like the grading system used in my school days. A, B, C, D, F ; various plusses and minuses in there of course. So the "benchmark" wine would be a C. I'd expect something solid, good in terms of price:quality, but nothing exceptional. In short, an average wine getting an average grade.


Onwards to the review!! 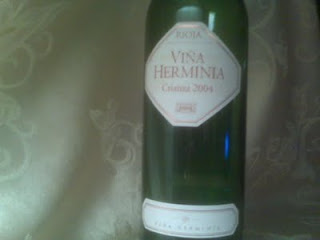 This was opened about one and a half hours before I tasted it, but it was not decanted and I didn't use one of those fancy aerators.
In the glass, it's a beautiful dark ruby color, absolutely gorgeous. You can tell there's some heft to the wine, but it isn't as crazy-dense as a Petit Sirah or something to that effect. The blend here is 85% Tempranillo and 15% Grenache (Garanacha), seemingly a standard blend in Rioja, unless of course the wine is 100% Tempranillo.

So on the nose, I immediately was hit by a spicy aroma, then in quick succession some black fruits like cherry or even cassis, earthy notes, oak, and some alcohol heat. Nothing out of the ordinary and everything was in a nice balance. I enjoyed sniffing it a few more times before deciding I had to taste it, after all I'd be doing a huge disservice by not sipping it..Right?

On the palate, I was struck by the soft, round tannins. They were absolutely pleasant, nothing too crazy and nothing too soft either. Again there was balance in how the tannins presented themselves. Right after that, I again got some spicy notes, black cherry, raspberry, leather, and American Oak manifested as a subtle vanilla tone. This is where the wine was a bit unbalanced, veering towards the black cherry and leather, with barest hints of oak and raspberry, along with just nuances of a spice. The finish was lightning quick, actually a bit disappointing to me. I wonder if I should have decanted it or aerated it. Then again, Jancis Robinson called it a "young but fully mature Rioja" right here. I know it doesn't matter much but I think she's spot on.

So there you go, my first real review. I'd give this wine a B-. It's solid, great price point, and there are some very pleasant aspects but it definitely didn't blow me away or make me want to go buy another bottle. It was definitely better than average but just didn't excite me the way I'd hoped.

I hope you enjoyed this post, please comment (be nice!) and let me know what you thought. If I'm wrong on things, tell me so I don't do it again. If you like what I wrote, please give me a shout out. Thanks and I'll be in touch soon! Oh and sorry about the horrid picture quality, that was taken with my Blackberry versus a proper digital camera.