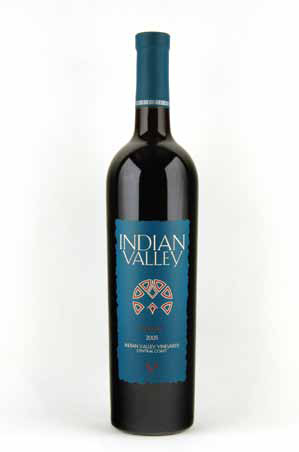 I picked up this wine at San Diego Wine Company a while back for under $10 and I was told it's really tasty by my trusted friend Mark (See him if you go to the store!). Unfortunately, it became "lost" during my recent move, shuffled between random mixed cases of wine and my wine fridge, before I found the bottle sitting on a random wine rack looking rather forlorn.

Eager to try and possibly write about it, I opened this Cabernet Franc/Cabernet Sauvignon blend up to have with some spicy meatballs and random grilled veggies. My idea was that the Cab Franc might be big enough to go along with very spicy meatballs (which is how I like them). The blend is 95% Cabernet France, 5% Cabernet Sauvignon and the wine is aged in a mix of  New American, French, and Hungarian oak barrels. According to the fact sheet I downloaded, the release date was in the Fall of 2009.

In the glass I noted a fairly dark garnet color, lightening up a bit towards the edges. My first whiff brought notes of ripe berries, vanilla, plums and cola. This definitely isn't the most complex wine I've ever smelled but at the price point, the aromas will get your attention. Of interest to me was how the berries, black and blue, were at first dominant but seamlessly gave way to the vanilla, anchored by a plummy sense of depth. I found the cola right at the end, as vanilla and ripe plums softened and dissipated.

When tasted, there were some firm, grippy tannins and a dark core of blueberry and vanilla oak. Also I found hints of teryaki and a leathery vein running somewhere in the mid palate. The finish was quick and painless, as if the wine had made it's statement then quickly exited stage left. While a longer, drawn out finish might be desired sometimes, this time the finish seemed to fit. Indian Valley Vineyards made an unpretentious red blend that his the budget price point squarely. For what I paid (a few dollars less than MSRP), I was fine with drinking the "Coral" and enjoying my spicy meatballs.

Would I buy this wine again? My answer is rather ambiguous but here it is: "Yea, sure, why not?". It may not blow you away, but for under $10, you get a solid B- and very tasty bottle for the wine drinker who enjoys big red wines with firm tannins and some interesting flavors. Indian Valley recommends a boar stew or venison, either of which would definitely be interesting. If I get it again, it'll be a summer burger wine, with my special burgers of course!