What's a Wine Bloggers Conference without a bit of pre-Conference activities? Well, it's still a Conference and great one at that. That was anti-climatic.

Here is a quick Top Ten list of the things I experienced before the Conference even started.

1. Wine and Beer with Tia (@wineinkbytia). We went down to Olive to taste some wines, then we got thirsty and had beers. Both beers were delicious and really hit the spot. Plus, the brews primed us for a weekend of wine, wine, and wine! The Lagunitas Censored Copper Ale was pretty tasty but our favorite was the Yakima Brewing Company's 1982 was absolutely amazing. It had a great amber color, toasty but crisp with a very refreshing finish. I hope I can find some in San Diego.

Now that I've fulfilled a promise to Tia, the list continues.

2. Olive in Walla Walla. I went back there to have a meal and it was delicious! Some of the group I was with had some pizzas and they were superb. Crisp, perfectly baked crust and a proper cheese to sauce ratio.

4. Cornerstone Cellars (@CornerStoneNapa) for throwing a rockin' pre-Conference party. They were pouring some delicious wines and had a big group of people in their rented house. Kudos to them for showing such nice hospitality to a bunch of wine bloggers.

5. Meeting people in the lobby of the Marcus Whitman, all of them for the first time, and it evolving into a big fun wine party. Attendees I didn't even know where showing up, opening bottles and pouring for all. What a welcome!

6. The Marcus Whitman Hotel, great place to hold such an event, they had my room ready to go, clean and they even cleared out the mini-bar for us so we could store our wine in it. Well that's what Thea told me at least. 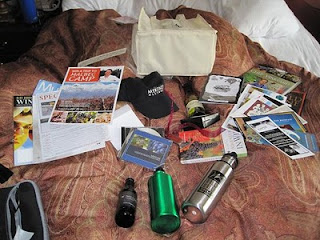 7. Purple teeth at 7pm. Come on, how cool is that! Almost as cool as drinking Malbec and having spaghetti and meatballs on a HOT day. (Only a few people might get this one)

8. Going to bed at 1:30, nursing a wonderful buzz, and that excited, giddy feeling that I was embarking on something that could and would change my life and encourage my passion like nothing before it.

9. Realizing that I had not forgotten anything vital at home. I think that speaks for itself....