It was time once more for a San Diego Wine Mafia tasting event! While some within the SDWM may not approve of that name, I don't care. It's my blog and I can use it as I please. Enough of us thought it was a brilliant name and that's what counts. Democracy baby!

Anyways, after the last event, we all had to sober up and pick a new theme. One of us, perhaps Bill aka Cuvee_Corner or Keith aka BrainWines, suggested Syrah. Expanding on this theme, it was agreed that we should do a head to head blind tasting of Paso Robles AVA Syrah versus Red Mountain (in Washington) AVA Syrah.

And so, the emails went out to wineries in those regions. A lot of wineries actually, and even I got into the act. As a newbie blogger, I was hesitant to ask for samples. That being said, I got precisely ZERO replies from the wineries I sent emails to. Yes, it's ridiculous that no one even took the time to say a polite "No thanks" to me.

Luckily, fellow SDWM members like Bill and Nanette of WineHarlots were able to exert their considerable influence and get us some samples for the event. Myself and Katie aka LaJollaMom, contributed wines we'd bought.

Here are some pictures from the event, courtesy of Keith.

In these two pictures, the Paso Robles Syrahs were on the left, the Red Mountain/Washington Syrahs on the right. We had Keith's wife tag and bag the wines to keep things as impartial as possible. For us tasters, the only information we had was the varietal and region. We didn't specify a vintage so they were all over the map, from 2004 to 2008 if I recall.

Here are my tasting notes, starting with Washington's wines. They're labeled 1-5.


1. 2005 Skylite Cellars Columbia Valley Syrah
Meaty, savory, and earth notes on the nose. I also found cherries and bramble, which was a good contrast. Great minerality and spice on the palate. Firm tannins that echoed a good Rhone. I marveled at the balance and wish I had a case sitting there waiting to be drank. This is classy Syrah and one that I feel is terrior-expressive.

2. 2004 Terra Blanca Reserve Winemaker's Barrel Select Red Mountain Syrah
Delicate, aromatic nose with lots of red fruit. Equally light, almost delicate on the palate. Very quick finish too, I found myself wanting more. I think this Syrah would be very food-friendly and there was a great little hit of spices on the mid palate that had me wishing that continued throughout the wine.

3. 2004 Matthews Red Mountain Syrah
Very earthy, almost a barnyard quality, yum! Reminded me of some Northern Rhone wines I'd had. I also liked the spicy black cherry and cranberry notes. This one was soft on the front palate but balanced out with earth, baking spice and dark chocolate on the finish.

4. 2006 Desert Wine Winery Columbia Valley Syrah
Very bright, a friendly, happy wine. This could be a crowd-pleaser at a party. I smelled loads of candied fruits and hints of baking spices. On the palate, soft, jammy wine dominated by red cherries. If you like your Syrah fruit-forward, check this one out. I'd pair Desert Wind's Syrah with something fresh off the grill, like dry-rubbed pork ribs.

5. 2004 Terra Blanca Block 8 Red Mountain Syrah
Spicy, intense nose grabbed my attention. There was some heat which was a bit of a turn-off. I liked the dried berries, earth and an interesting note of something charred/savory. The tannins were at first almost overpowering but then I got a sense of how well they were integrated with this wine and I appreciated it.

Overall I enjoyed the Skylite Cellars and Matthews Syrahs the most. They were absolutely superb and show how amazing Washington Syrah can be. I hope you get the chance to taste these at some point.

Onwards to Paso Robles! I confess to not having a clearly defined idea of what Paso wines are about. Often, to me, they're overbearing, over-extracted, too loud and just plain too much. That being said, I was really happy to taste some examples from the region because they're obviously popular wines and tend to be well made.

A. 2007 J. Lohr South Ridge Paso Robles Syrah
I called this a "big, super-ripe" wine. Loads of jammy currant and red cherry, very soft and approachable. I'd call this highly extracted and then oaked up for a while. This is a wine I'd bring to a group of non-Syrah drinkers, to introduce them to the varietal and show how fruit can dominate a wine. If you're grilling a burger on a summer afternoon, J. Lhor's Syrah would go great with it.

B. 2006 Vina Robles Paso Robles Syrah
I loved the subtle, complex nose. It was more approachable for my palate however it retained that big, ripe fruit structure that Paso Robles is known for. I was exceedingly happy to find some tannins weaving their way through the blackberries, cherries, plum and vanilla notes. A good wine from a producer I hadn't tried before.

C. 2007 Tablas Creek Paso Robles Syrah
I wrote: "YUM! Elegant yet rich, would be superb but for the alcohol on the nose!" I don't like having to wait for alcohol to blow off and this had been open for almost an hour as I recall. Good structure that integrated tannins, earth (dust), dark chocolate, plums and even a hint of grape-y-ness. Interesting wine save for one small flaw.

D. 2007 Mitchella Paso Robles Syrah
I wrote: "A nice nose, but just nice..somewhat muted" and that's my biggest issue with this wine. The flavors were so hard to discern for me. Perhaps 3-4 hours in a decanter would fix that though. What I did find was candied fruit and some nicely rounded tannins that carried through from beginning to end. A good wine, just didn't show that well on this day.

So overall, ten wines were tasted. I picked the Skylite Cellars and the Herman Story as my top two picks. They were superb wines and both received ratings of A+ from me. I should note that the only place you can get the 2005 Skylite is by calling the winery and begging for them to sell you a bottle out of their library. You should. Seriously.

To sum it up, I had another awesome time with my San Diego Twitter Taste Live friends. What a great group of wine lovers to hang out with. I invited my buddy Justin along to experience a wine tasting and he came away impressed, even if he didn't understand half the stuff we were talking about. 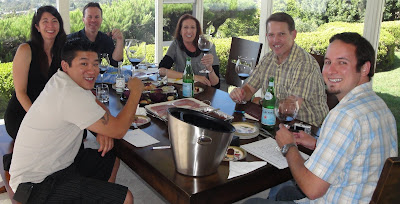 Here's the before picture, where we all were just beginning to sip our wines. Look at everyone even taking notes! Granted, without those notes, I'd have been lost. 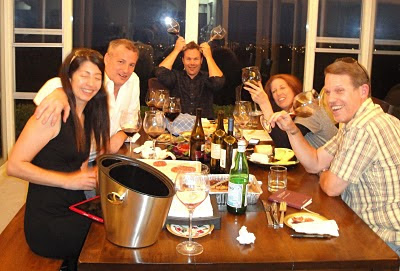 And here's the after-shot. Unfortunately Justin and I had to leave to attend a going-away part for one of our coworkers so we couldn't stick around for the after-party at Keith's place.

For your consideration, here are the websites of my fellow San Diego Wine Mafia friends:

Next up, Pinot Noir versus Burgundy! I'm excited about this one as I am a huge huge huge fan of the varietal.