The third Thursday of each November has become known as "Beaujolais Day", a day when wine lovers of the world celebrate with a glass (or bottle) of Beaujolais Nouveau.

What then, is Beaujolais Nouveau and why should we join together to celebrate it? Two questions that many people unfamiliar with this celebratory day will ask. I suspect most of the general public is aware of Beaujolais Nouveau day as I am aware of the proper way to perform open-heart surgery. You/They/Them might see the flashy PR materials and press articles then dismiss them as something wine geeks do to pass the time. But wait, there's more! 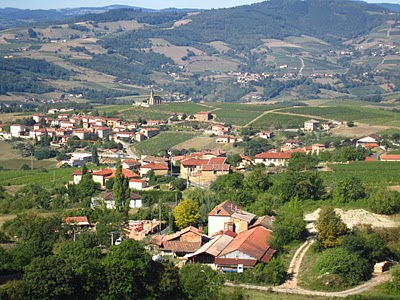 A bit of history and world geography then. Beaujolais is a region within an appellation within a country. France would be the country, Burgundy would be the appellation. Within that is the Beaujolais region/sub-appellation, and here we can find some truly amazing wines. We also find Beaujolais Nouveau, which is the first wine released from each year's vintage. Originally the Nouveau was cheap, quaffable juice that was hauled down from Burgundy to Lyon as something to drink dock-side or at home as a way to commemorate another year's harvest.

Often it fermented the entire length of the journey and was consumed as a "young" wine. These days, by law, the only grape that can be used is Gamay Noir, and a fermentation technique called Carbonic Maceration must be employed. That means very little, if any pressing of the grapes, rather, carbon dioxide is pumped into sealed vessels to begin fermentation within the grape itself. This results in lower tannins and alcohol along with a youthful, it not well suited for aging, style of wine.

In the 1970's, Georges DuBoeuf began to market the festive side of Beaujolais Nouveau, introducing it across Paris, then to the United States. The them this year is that of a circus, or cirque en Francais. Around the country, wine lovers are partying it up with many bottles of Beaujolais Nouveau (often provided for free). It's a relatively good marketing campaign, though research has shown consumption of Nouveau dropping for the past several years.

Where does this leave us then? I could make fun of Beaujolais Day, like many bloggers do. I could whine about it on Twitter or Facebook. What's the point though? I keep repeating my belief that wine brings people together and can be such a great way to connect or reconnect. To me, a day like today is wonderful because it enables us to get together and talk about something unique. How often do we drink Gamay? Probably more often than we get a chance to taste a wine made by Carbonic Maceration! This alone can stir up some fun conversation.

The wine itself is simplistic, young, racy, acidic and very rustic. In the samples I was sent, I detected notes of banana and bubblegum, hints of earth and kirsch, along with sour cherry. Pretty basic stuff but this isn't a wine to age. Remember, the whole point of Beaujolais Nouveau Day is to celebrate the first wine of the year's harvest. 2010 has potential to be a very good or perhaps even great year, Beaujolais Nouveau might help start that conversation along.

For more information, check out http://www.duboeufnouveau.com and @GeorgesDuBoeuf on Twitter.


These wines were received as press samples