Another Cooking Blog! Sans Smoke and Fire even!

Here we go again. That's what went through my head when, after a lot of urging from my friends, I decided to document another culinary (mis)adventure. I love cooking and creating food but I have no formal training, so with that serving as a disclaimer, we can proceed. 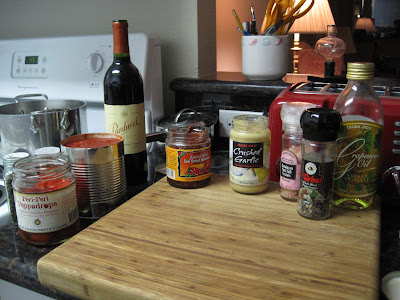 I suppose I should begin with the wine, a bottle of 2007 Parducci Cabernet Sauvignon that I had written about the night before. The wine tasted and smelled a bit tired on this night, but it was still completely fine for cooking. I firmly believe in cooking with good quality wines, the kind you'd drink. I feel if you cook with cheap crap like Charles Shaw, you're doing yourself and the food a disservice. That's my rant for tonight.

Inspiration tonight comes from a good friend of mine and I thank her for that. If I'd burned the kitchen down, I'd have blamed her though! 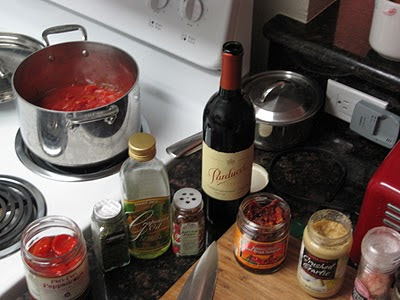 The ingredients here are pretty self-explanatory, I was going for a flavor profile of herbs, tomato with a spicy finish.
That large steel can in the picture above held some diced tomatoes and those were first into the pot. Obviously a pretty straightforward base for a pasta sauce. I like to get all the ingredients simmering together for as long as possible so I added a tiny bit of chili flakes and cayenne pepper, crushed garlic, the wine, salt, and fresh ground pepper. 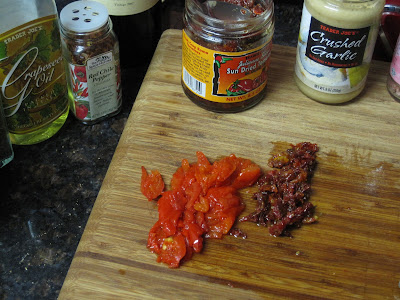 If you look closely at these two pictures,
you can see something rising from the pot. I assure you, gentle reader, it's merely steam and not the beginnings of a Stage IV Kitchen Apocalypse. Capturing the rising steam (which happened to smell delicious) was not without it's own bit of peril though. Steam, as it turns out, is hot.

Also I will take a moment to remind you all that knives are sharp and should be handled with care. Getting cut with one does hurt but can leave a neat scar.
Sharp-eyed readers might wonder what the hell "Peri-Peri Peppadrops" are. My first experience was seeing them on the shelf at Trader Joe's. Since I'm a sucker for spicy foods, a jar soon found it's way into my fridge. From the front of the jar: "Pickled Piquante Peppers"and "Not too sweet and not too spicy". Good summation, there's a nice balance of heat and flavor here, perfect for adding another dimension to food. Texturally these are very soft and if you use them, be aware that it's somewhat difficult to get the skins to brown evenly, or it was for me. Perhaps that's just my lack of skill. 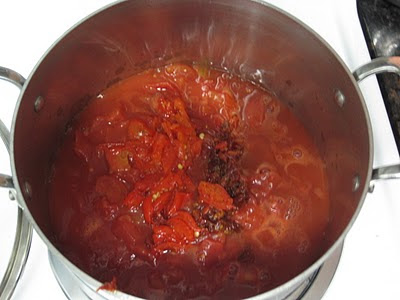 Since I'm not cooking in the kitchens of the French Laundry, dicing food doesn't need to be a precise exercise, the stuff just needs to be cut up into small bits.
In the picture to the right, you can see I've added in my diced sun-dried tomatoes and the Peri Peri Peppadrops. "Where is that steam?" you may ask, at this point I had turned the burner down a bit so that I would have more time to prepare the other parts of the meal. I know there are those who enjoy cooking at a fast pace, I don't enjoy being rushed in the kitchen though. Part of my philosophy on cooking at home is that when you make a dish, you should tweak it constantly, attempting to better some element here or there.


I've learned much by my (often disastrous) "experiments" with flavorings and the slow pace at which I cook lends itself to a trial and error methodology. 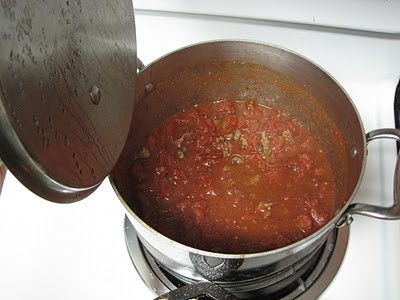 To the left you can see the sauce after two hours of simmering merrily away. Can sauce simmer merrily? Yes, or else I wouldn't have said it. About 20 minutes after the previous ingredients were added, I browned and seasoned some ground beef then added it to pot. Beef has wonderful flavor to begin with, but if you allow the meat some time to soak in the sauce and take on those flavors, the result is wonderful. I partially browned the beef then let it finish cooking in the sauce pot. At no point was I worried about raw beef, since the sauce itself was so hot and the stove was on low.
Ground turkey, venison, pork, and chicken are also choices. Continuing a theme, this is what I had on hand so it went into the pot. 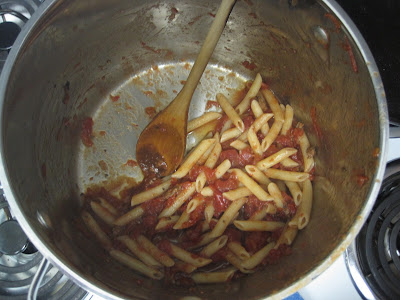 I chose penne because I had the pasta sitting in my cupboard and had not used it in a while. I wish I had a better explanation but there you have it. A guerrilla-cook can often just go with what he (or she) has on hand.
Next time, I will use spaghetti or linguine, or just go with something I've never used before. Penne for me always seems to take longer to cook than the aforementioned shapes, so it was a simple matter to cook this batch part of the way then transfer it into the pot to absorb and finish cooking within the sauce. Did I mention that in my last cooking blog? I think so, since I recall someone telling me of the technique earlier this year. 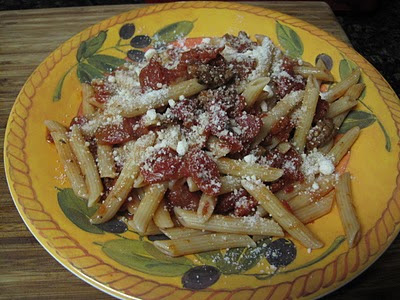 To the right is the outcome of all the words above. I'm not very good at using Parmesan cheese out of a tube, and since I lacked a chunk of cheese to shave over the pasta, it's all I had to go with. The results are right there for you to see. Way too much cheese, I even attempted to pick some off but that didn't work. Still, the sauce was tasty and the pasta did as I asked, absorbing a lot of flavors while it finished cooking in the sauce pot.

You can choose to add some more salt and pepper, maybe some more chili flakes if you desire. I never have used a lot of salt in my cooking but that's merely personal preference. I seek balance and based on the ingredients in this dish, more than just a touch of salt could have overwhelmed what I was seeking.

Home cooked, full of flavors, a bit of spice and very filling. That's how I'd describe this meal in a tweet or in a one-sentence blurb.

Another culinary adventure, keeping with the theme of pasta and red sauces. Yes, I can and do cook other things quite often, it's just that I rarely have my camera in the kitchen. Some of my San Diego Wine Mafia friends have suggested I buy a Flip video camera and record my cooking (and wine tasting) then post those videos. Maybe 2011 will see that happen.

Do I remember the wine I had with this meal? Nope. I know I had some wine and I think it may have in fact been the Parducci Cabernet Sauvignon, but somehow I doubt that. Too bad, because as I type this I can think of a couple of wines that would pair well. Obviously, something from Tuscany but beyond that, a Chateauneuf du Pape would also be fun to. From Austria, a St. Laurent also would have been a neat wine to try. Next time I'll do a better job of documenting the wine and food interaction. Thank you for reading and commenting!