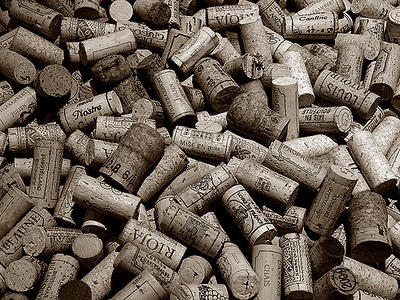 (img src http://www.flickr.com/photos/minebilder/127118378/)
Today I noticed some tweets regarding Cork'd, one of the first social media/wine reviewing/interactive websites I became aware of. Way back in 2007, almost exactly four years ago, I joined Cork'd and posted up some reviews. The site had a good core group of wine people and often featured interesting articles in addition to the reviews. As it stands today, I was able to post 61 reviews from cheap stuff like Bishop's Peak to high end Cabernet like the magnificent 2001 Jarvis.

While I drifted away from reviewing wines on that site, it was always a good way to see how different every one's opinions were regarding wine (and obviously everything else). So it was with some sadness that I saw Gary Vaynerchuk announce that Cork'd was winding down operations. The CEO, Lindsay Ronga, is moving on to other opportunities, Gary and Senior Editor Jon Troutman just don't have the time to commit to the site. You can see Gary's video here.

As I write this article though, I can't help but reflect on one thing I learned from Cork'd that continues to affect me and my interactions with fellow wine lovers. Back in 2007 I'd notice a review of something like Beringer White Zinfandel on the site, with a score of 92 points. I'd see people raving about how amazing this wine was and it would make me laugh with contempt. Who were they, these wine "lovers" who'd dare use the 100 point scale to rate a white zinfandel? How dare they even post a review? Admittedly an arrogant attitude, one wholly self-centered. Sadly I still see that all over the internet, but for me a change occurred when I realized that those wine lovers actually thought their white zinfandel was delicious.

I learned that as someone with a bit of knowledge about wine, it's my responsibility to encourage people to drink what they love, not what I think they should love. If person A loves merlot and person B loves white zinfandel, who am I to tell them they need to be drinking a Bordeaux or a Tavel to be taken seriously? That's a fundamental truth that often gets overlooked in the blogosphere. I still make the mistake of writing off people who don't care to open a White Burgundy and are happily content with their supermarket California Chardonnays. I'm getting better at catching myself though, and doing a better job of listening to what someone likes instead of listening to them not know anything about wine.

For that, I have Cork'd to thank.