This is a head to head showdown of $10 red wines! One, hailing from Juanico Estate's Pueblo del Sol in Uruguay and the other from the great state of confusion California. Raise your hand if you have ever had a wine from Uruguay before? I see five people raising their hands. Yikes! Now raise your hand if you've ever had the varietal tannat before, regardless of where the wine was from. And that makes 12 people in total, so we've established (entirely unscientifically) that most wine drinkers have never had wine from Uruguay and/or the varietal tannat. 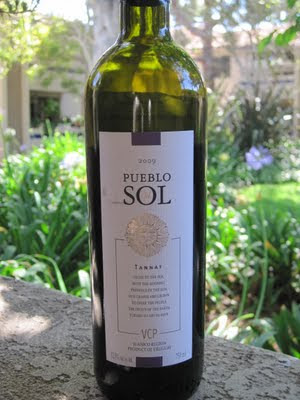 I was recently sent this sample of 2009 Pueblo del Sol tannat from the fine people at TasteVino Selections, who reached out and asked if I was interested. Being the wine geek that I am, of course I said yes, send it over! After resting in my wine fridge for about a month, I was all ready to give it a sniff, swirl, and sip. First though, let's get some background on this relatively obscure grape.

The "national grape" of Uruguay, tannat was brought there in 1870, where it thrived but mostly in the domestic market. There are about 20,000 acres under vine within Uruguay, featuring 270 wineries. This example is from a winery founded in 1830, Juanico Estate. Since 1979, the Deicas family has owned and operated the estate, and is a pioneer in sustainable viticultural practices there.

With that brief bit of info behind us, let's now explore the wine. Pueblo del Sol's tannat is a nice dark red/purple that lightens out towards the edges of the glass. It gave the impression of a dense, flavorful glass of wine, yet is only at 12.5% alcohol. I was interested to learn that this tannat is unoaked, but I couldn't find out if the winemaker used steel tanks or cement casks.

My first whiffs brought back memories of 2009 Beaujolais, with the linear streak of gravel racing up out of my glass. There's more though, some nice plum, blackberry, and desert scrub. The aromas blend together nicely, but you must let this wine open up for a while, something I've noticed in all the tannat's I've ever had.

Tasting the wine immediately brought a smile to my face because this is a wine geek's wine. Very nice structurally, with big, beefy tannins providing a framework for ripe sweet black cherry. More of that minerality comes through along with a dollop of acidity to counter the sweet black fruits. The finish is a bit abrupt, leading me to believe the Pueblo del Sol is going to be better when accompanied by food that is richly flavored and maybe even on the earthy side.

In my opinion, this is a rockin' $10 bottle of wine, one well worthy to add to your summer collection. My only knock would be the abrupt finish, which left me a bit sad and wishing for more. Still, this is a B and a BUY recommendation, especially at that price. You can buy directly from the TasteVino website or from K&L Wine Merchants up in the Bay Area. 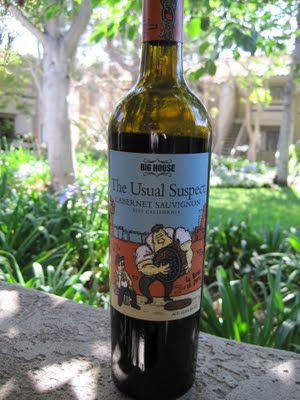 From Uruguay, I moved back to California and the grape which catapulted this state to it's (rightful) place among the world's elite wine regions. You may recall I reviewed the 2009 Big House Unchained chardonnay, now I am sampling out the 2009 The Usual Suspect cabernet sauvignon. This cabernet comes in at $10 suggested retail, and 13.5% alcohol. The tech sheet says 30,000 cases were produced in 750ml and 3L formats combined. Since the bottle says "California", the grapes are from all over the state, not any specific appellation.

As an aside, I am positively thrilled to be tasting two lower-alcohol red wines today, and indeed most of the low-alcohol wines I've tasted over the past few months could easily hold their own against wines with higher alcohol content.

Back on topic, there is 10% grenache in here and the winemaker, Georgetta Dane, states that she went for a big, bombastically fruity style. She calls the heavily oaked iterations of cabernet "stodgy"..I tend to agree. The 2009 The Usual Suspect smacks you in the face with a ladle of ripe, jammy red fruit. It's like sniffing a freshly made mixed-berry preserve. Beyond that, the barest hints of green herb and bell pepper peek around the monolithic fruit aromas. Somewhere, a faint aroma of black pepper cries out to be noticed but it's like searching for a tic tac in a glacier.

That massive fruit, while very fresh, carries through to the palate as well. There are just enough tannins though to restrain things before they get crazy. Like that older guy in your fraternity who'd hide the whippets before the freshman got into them at the annual pledge party. Or something...

Anyways! So with the tannins restraining the fruit, I can enjoy this wine for what it is, a summertime barbecue red to whip out when your buddies come over to grill. They'll enjoy it, their girlfriends and wives will too. The Usual Suspect is far from suspect, as far as cabernet sauvignon is concerned. A B- and a BUY recommendation from me. At a suggested retail of $10 and an actual retail closer to $7, it's a nice wine to have on hand as we get into warmer weather.

The head to head battle was close, in the end I might take the Pueblo del Sol over The Usual Suspect simply because it's a more geek-oriented wine. I think they're both well made, good tasting wines. However, if I knew my friends were coming over, I'd also buy a couple of bottles of The Usual Suspect so that they'd have something else to choose from. These wines were sent as media samples for review.