House of Jerky and Their Jerky Lineup!

While most of my blog is devoted to wine reviews, I do occasionally try to add in other things that interest me. You may have noted the beer blogs I've posted over the past months as well as various blogs detailing my often-futile attempts in the kitchen. In keeping with that theme, here's a blog about jerky. Most Americans are fans of jerky, and I'm sure everyone has had the common varieties you find in supermarkets and convenience stores. I grew up eating the stuff during Cub Scout and Boy Scout trips, and I must admit that it did help me get through flight school during late night sessions in the simulator and long cross country trips in a Cessna 172.

The other side of the jerky coin is the gourmet jerky, from purveyors like House of Jerky. This is the top quality stuff, made with natural ingredients, no added chemicals, and often using old family recipes instead of big factories. I was sent a huge sampling of the various kinds of jerky that the folks at House of Jerky make, and got to taste through them over the past few weeks. Both beer and wine were paired in an attempt to draw some conclusions as to the nature of these pairings. Last year I introduced the San Diego Wine Mafia to my favorite jerky pairing, featuring pinot noir and beef jerky. Here I'll explore other varietals and other kinds of jerky.

Since I want to keep the listing concise, I'll just list the kind of jerky, what I liked it about it, and what wine and/or beer would pair well with it. 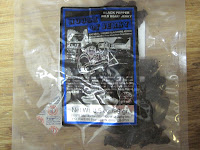 Black Pepper Wild Boar Jerky - This is a chewy, earthy jerky with the spicy pepper notes meandering throughout. A salty/sweet kick at the end just begs for something interesting like and off-dry riesling from Oregon, or a rich, tannic syrah from Washington. Either way, you better prepare your mouth for an epic adventure of taste and flavor. 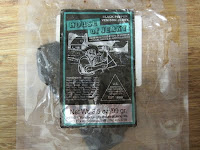 Black Pepper Venison Jerky - Lean, gamey taste with spicy pepper bursts at the edges of your tongue. Great texture and the heat from the black pepper carries on for a while. Bring me some Chocolate Stout or a Paso Robles zinfandel for this awesome stuff. And also please bring me some salty potato chips to complete the palate pleasing trifecta. Sweet and Spicy Beef Jerky - This reminds me of the stuff from my youth, the sweet is great because it shows first, but the spice is powerful and demands something equally strong. A nice oak aged Porter would do well, as would a sweet gewurztraminer or Spanish grenache. My experiments with India Pale Ales and cabernet sauvignon didn't go well and the pinot I tasted simply wilted under the jerky attack. 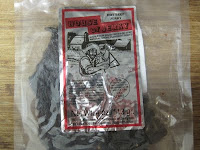 Hot Beef Jerky - While the previous beef jerky was spicy, this is HOT stuff! It's definitely beef jerky, there's a sweet, earthy flavor there behind the wall of spicy hotness. Bring on the sweet riesling's, nitrogen conditioned stouts, and port wines. Basically though, this is in a class by itself and perhaps needs a pear or apple cider. My friend Becky suggested a red like barbera or carmine, they're worth a shot too. 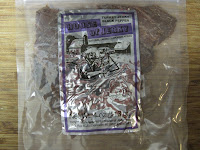 Black Pepper Turkey Jerky - One of the drier jerkies that I received, also one of the saltiest. I think this would pair exceptionally well with Champagne or sparkling wine. Perhaps one that has some residual sugar, a demi sec or extra dry instead of a brut. There's a mild pepper flavor that's incredibly pleasing, making this one of my favorite samples out of the entire box. Try it also with a big, hoppy IPA and you'll be happy as can be. 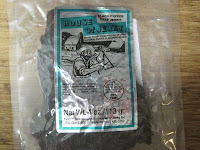 Black Pepper Beef Jerky - The driest of the jerky samples, so I think that the barbera I mentioned earlier would pair extremely well with this one, also a full bodied amber ale like the Calico from Ballast Point. There's  hardly any pepper here, instead, a nice mix of salty, beefy flavors with a hint of sweet right on the finish. Honestly this might be the most versatile jerky in the package. 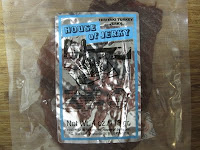 Teriyaki Turkey Jerky - Moist, tender, sweet teriyaki flavors along with the poultry flavor of turkey. Wowie, so damn tasty! I want that strong IPA now or a big California cabernet that's bursting with berry notes and oak. One of those usually-nasty fruit bombs would absolutely kill it in a pairing here. Also, I had some Willamette chardonnays last week that would rock too, like the 2008 Estate from Johan especially! 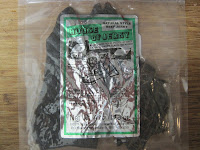 Natural Style Beef - Another dry jerky, but oh my goodness is this one good! Pure beef flavor, like eating dried filet mignon. Give me an American Pale Ale with this or crack a bottle of Chateauneuf du Pape, from a year where they didn't screw it up with too much extraction. I also found that this paired exceptionally nicely with a Russian River Valley pinot noir, surprisingly good in fact. 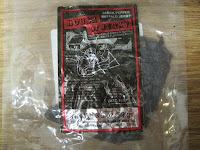 Black Pepper Buffalo Jerky - If I have one gripe about this one, it's just too dry. I loved the texture though, the gamey buffalo meat and the pepper complement each other so well, and there's just this crazy-cool hint of cocoa powder in there too. Give me a bottle of Cana's Feast merlot please! That and leave me in peace to just enjoy some awesome flavors in my mouth. 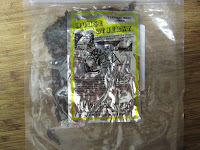 Teriyaki Beef Jerky - Perhaps the most straightforward jerky in the amazing sampler pack, but also the one that brought me back to childhood. Nice thin sheets with a sweet teriyaki sauce that kept the beef moist and chewy. A hint of nuttiness on the mid palate was very pleasant. Since this took me back to childhood, so too will my wine (in a way). I'll take a bottle of Gary Farrell Russian River Valley Pinot Noir please. My dad sold Gary's wines down here in San Diego until the winery was gobbled up by a conglomerate, so I grew up with cases of this stuff around the house. I suspect it was my first domestic pinot noir ever.


I just tasted through ten different jerkies for you all, feel free to tell me what a committed, awesome author I am. What sacrifice, all to please and entertain my readers!

Kidding aside, the samples sent to me by House of Jerky were all outstanding and I cannot urge you enough to go to their website and check out the selection. I want to thank Janie for reaching out to me and sending these sampler bags along. You can follow them on twitter @HouseofJerky and Janie is truly one of the more engaging people out there.