I was recently asked to take part in evaluating a wine club, called the "California Wine Club". This isn't one that's run by a winery however, rather one where you receive different producers with each shipment. In that way, perhaps it's better for someone just starting to explore wines, because you're always getting something new to try. Clubs like this are often risky though, because the wines can either but custom labeled bulk wines or commercial grade selections from big wineries.

As part of the review process, I was given a complimentary three month membership in the "Premier Club". This is the first of three blog posts evaluating the shipments of wine I get and what I think of the club. First though, some background on this wine club. For starters, there are four club levels, with the Premier Club being the lowest-tiered. Since this club's wines are the ones I'm receiving, I'll be focusing on it instead of the other club levels. 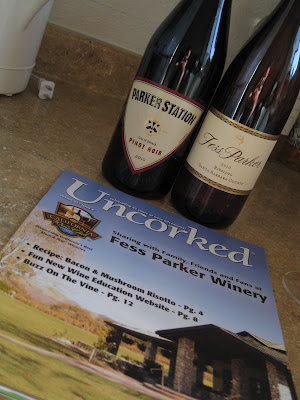 Each shipment contains two bottles of wine (duh!), a newsletter, a special offer sheet, and a few other rather irrelevant bits of marketing material. The newsletter, called "Uncorked", has information on the current month's wines, recipes, some wine education articles, and at the back is a little bit about wines previously offered. The enclosed materials frequently mention that reordering any of the wines gets you a substantial discount.

So then, on to the wines! That's why you might join the club, right? For this shipment, I was sent two bottles from Fess Parker Winery, one of the biggest wineries in Santa Barbara County and a producer with a good reputation for delivering quality across the price spectrum. I have to admit though, I was a bit disappointed to open the box and find Fess Parker, especially when the Premier Club sells itself as finding "mom and pop wineries". Sure Fess Parker is family owned, but they make a ton of wine.

Still, I wanted to taste the wines, a 2010 pinot noir and 2010 riesling, and see just how far the $50 went. Interestingly, the pinot noir is listed at a suggested retail price of $26, and the riesling at $17. That said, a simple internet search showed the 2010 Parker Station pinot at around $11 and the 2010 Fess Parker Riesling at around the same price. That adds up to about $24, or half the monthly fee. The rest must go into the newsletter production and shipping costs. 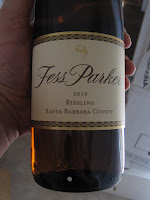 2010 Fess Parker Riesling Santa Barbara County: I had some spicy Chinese food the other day and opened the riesling to pair with it. Despite my good intentions, I should have paid more attention because at a pH of 3.11 and 12% alcohol, this is a dry riesling. A sweeter wine would have been a smarter pairing. This riesling has a nice bouquet, full of floral notes intermixed with apricot, red apple, and a touch of spice. On the palate it's clean and crisp, with a nice citrus and lemon zest component. There's plenty of acidity to keep the flavors from getting too sweet and ripe, something I was happy to find. Overall it's a really solid riesling and at around $11, a smart purchase. Good job by the California Wine Club! 12% abv. 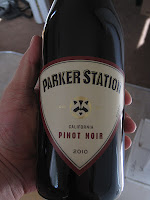 2010 Fess Parker "Parker Station" Pinot Noir California: With the pinot, I had no food pairing to try, just the desire to drink pinot noir, and one that wasn't from Oregon. Living in the Willamette Valley gives me the chance to try a lot of outstanding pinot noir but sometimes I seek California's take on this finicky grape. I do get suspicious of such cheap pinot though, especially ones that just list "California" instead of a specific AVA. So then, the wine. It's gorgeously colored, and I mean gorgeous! I was sipping this as I washed dishes and when the sun hit the glass, it was like a ruby exploded. I gave it a few sniffs and immediately noticed a ripe, almost candied-cherry aroma. There's also a hint of baking spice and some very faint cranberry. On the palate it's thin and somewhat lackluster though, and I felt it was very one dimensional. Spicy cherry and then it's gone, with no finish to speak of. 13.8% abv.

So as of this writing, the California Wine Club's Premier Club is batting .500, which would get you into the Hall of Fame if you played baseball. This isn't baseball. While I liked the Fess Parker riesling, I thought the pinot was really disappointing, especially since the Uncorked newsletter claimed the suggested retail is $26. At around $11 it's what you would expect from a pinot, but at $26 you're getting hosed.

With that said, I have to add in the caveat that this is not the kind of club I myself would join, because my palate preferences range much deeper into the geeky, esoteric side of wine. I think anyone who got these two bottles would be pretty happy, and the supporting material (in particular the Uncorked magazine) is solid. If you want to give your mom a Mother's Day gift, you should consider this club. If you use the code "beau12" at checkout, your mom will get four bottles instead of two. That might be the best deal of the whole club!

Stay tuned for the wines in the next shipment. I am keeping my fingers crossed that they're from a smaller production, slightly more authentic mom and pop winery.