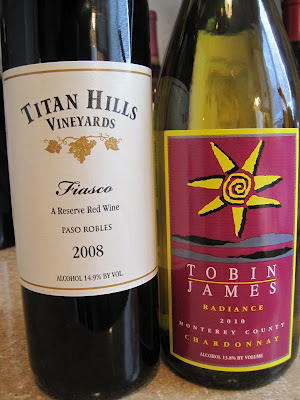 I was sent the second in a series of three shipments from the California Wine Club recently. The first shipment was wines from Fess Parker, a very well known and respected winery in Central California. This time, another well known (and respected) producer called Tobin James Cellars was selected for us. 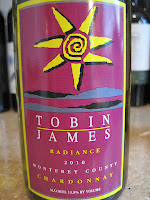 2010 Tobin James “Radiance” Monterey County Chardonnay: This chardonnay pours a pale gold in the glass, and you're immediately struck by a mish-mash of buttered popcorn, lemon, and tropical fruit aromas. Sourced from Lockwood Vineyard in Monterey County, only 4,000 cases were produced in 2010. On the palate it's got a lot of acid and no real trace of oak. Indeed, only 8% of the harvest was barrel-fermented. Lots of zesty citrus on the palate combines with some buttery texture to create a bit of an awkward mouthfeel though. The finish is medium-length and gently evaporates from the palate. Overall, a solid if unremarkable chardonnay that will probably please the masses. 13.8% abv. SRP: $18, CA Wine Club: $10.99 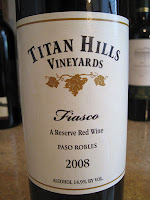 2008 Tobin James Titan Hills Vineyards “Fiasco”: This is something interesting, a wine made from grapes harvested over a 1.5 month period, from 20 vineyards. When I read the info sheet I scratched my head, but figured what's the worst that could happen? Mostly syrah (55%), with 25% zinfandel and 20% barbera thrown in to complete the blend. Alcohol is a rather large 14.9%, according to the label. I wouldn't be surprised if it was closer to 16% though. Loads of peppery spice, jammy black fruit, and wood smoke rush up out of the glass. Oh and alcohol too. The palate shows big, jammy black fruit, more wood smoke flavors, earth, and black pepper. Bring this one out during your barbecues and watch your non-wine-geek buddies lose their shit. SRP $21, CA Wine Club: $11.99.


As with the previous California Wine Club wines, this shipment was 1 for 2. The chardonnay wasn't that great, and to me it tasted like it cost $10 at a grocery store. On the other hand, I know a bunch of people who I'd love to have over to share the bottle of "Fiasco" with, while we grill up some thick steaks and burgers. If I paid $21 at a retail store I'd be ok with that, but I love the California Wine Club price of $11.99.

One final thought before I wrap this up; as I browsed the literature, I noticed both wines were released a while ago. In the case of the Radiance chardonnay, a year ago. The "Fiasco" was released way back in the summer of 2010. I would imagine that the 2011 Radiance chardonnay is about ready to be released, and the Fiasco too - if they've made another batch. That might explain why these are available at such a discount, the California Wine Club could have gotten them on a closeout, at lower prices.

You can find the California Wine Club on Twitter as @cawineclub and The Boring Wine Guy as @boringwineguy. Bruce Boring is one half of the founding team behind this club, the other being his wife Pam. The California Wine Club Facebook Page is also full of activity and a good place to talk about your experiences. The Boring Wine Guy is also on Facebook. If you use the code "beau12" at checkout, you will get four bottles instead of two. That might be the best deal of the whole club!