After my last experience tasting wine from New York's Finger Lakes region, one which was a disaster, I was approached by my friend and fellow wine blogger Lenn Thompson. Lenn is one of the wine blogging world's heavyweights, as the editor of the New York Cork Report. He saw my piece on the Finger Lakes Virtual Tasting and asked me if I was interested in participating in another tasting at some point in the future.

Despite my bad experience with the previous Finger Lakes wines, I told him I was interested but promptly forgot about it. Life has been crazy since February..or better yet, since I moved here in October of last year. When Lenn did reach out to me with a firm date, asking if I wanted to do another virtual tasting with a single producer's wines, I readily agreed and looked forward to another round with wines from the Finger Lakes.

This time, we were tasting the wines from Red Tail Ridge, a 32 acre vineyard and winery located close to Seneca Lake. Founded in 2004, Red Tail Ridge makes a lineup of wines using both common and uncommon varieties. Since the Finger Lakes region is un-constrained by the dogmatic adherence to cabernet, syrah, and chardonnay that Napa Valley is, the wine growers love to plant unique and sometimes crazy grape species.

Unfortunately, the day of the virtual tasting came and I still had no wine! It didn't show up until later in the afternoon, an hour or two before the tasting start. This seems to happen frequently in virtual tastings, and while I won't single out Red Tail Ridge, I'll say that it's almost worthless to send out wine samples and not allow at least two weeks for the wine to settle. PR and marketing people should take note, get your acts together and if you're going to send out samples for virtual tastings, do so sooner rather than later. 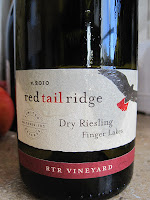 2010 Red Tail Ridge Dry Riesling: Notes of ripe apricot, white flowers, and tropical fruits are all nicely integrated into a fun, aromatic bouquet. The palate brings vibrant acidity that showcases flavors of lemon, summer melon, and baking spices. As far as rieslings go, this is utterly delicious, and one of those wines that is flat-out fun to drink. Only 12% alcohol too, and best enjoyed with a nice chill on it.

2010 Red Tail Ridge Pinot Noir Estate Grown: Notes of shoe leather, shoe polish, cranberry, raw peppercorn, and green herbs make up the bouquet. Some slight burning sensations come out too, can't figure out if it's unbalanced alcohol or ethyl acetate. An intriguing bouquet that's worlds better than the first night it was opened. On the palate this is somewhat rustic, with prickly acidity all over the place, a savory note, and more of the cranberries mixing with cherries. Vaguely reminiscent of a pinot noir from Alto Adige, yet retaining it's own fickle texture. Hardly any tannin and an evaporative, quick finish that's all angles and green herb flavor. I get the distinct sense that this pinot noir is very uncomfortable right now, but will settle with age. 13.8% abv. 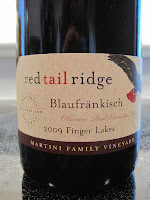 2009 Red Tail Ridge Blaufrankisch: Aromas of soil, tar, spices, and lots of red berry fruit rush up out of the glass. At first, the tar scent dominates before giving way to the red berries and spices. I liked this even more on the second day. It's a zingy wine with nice acidity but hardly any tannin. Still, that works becasue there's enough spice and red fruit mixed with a smokey, salted meat flavor to keep things interesting. The finish is medium length, retaining enough of that savory-meat quality to make your palate thirst for the next sip. 12% abv. 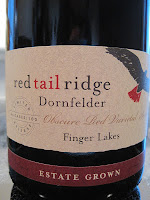 NV Red Tail Ridge Dornfelder: I'll admit, this wine confused me. When I pulled the cork, I thought I smelled something akin to hot plastic, like one of those hospital oxygen masks left in the sun. Weird! As the wine sat in my glass though, it began to show lots of plum and spice notes, along with black cherry and wood. Sipping this wine was like eating a bowl full of mixed, red berry fruit with little pieces of smoked meat thrown in. There was also a pleasant minerality that I found very compelling, especially on the second day. Another thing that impressed me about this Dornfelder was the long finish, easily lasting about 30 seconds. 12% abv.


For my palate, Red Tail Ridge is producing some of the best red wines in New York. Unfortunately, I have to say that I haven't had many reds from my home state yet. Still, the wines I tasted were compelling and although young, showed great promise. I liked the Dornfelder, a blend of the 2009 and 2010 vintages, for its uniqueness. The pinot noir shows that good pinot can in fact come from the Finger Lakes, and the Blaufrankisch was absolutely delicious. Of course, the Riesling was a fun, friendly wine too.

Since the wines arrived on the day of the Twitter Tasting, I refused to open and taste them, save for the Pinot Noir, and therefore missed out on some insights from the winery's representatives whom were on hand to answer questions. I also forgot to get a good picture of the Pinot Noir. Hindsight being what it is, I am glad I waited several months for the wines to settle out, because they would have been tough to drink on that warm April night.

Thanks to Lenn Thompson and the people at Red Tail Ridge for putting this together and showing me some delicious wines from the Finger Lakes of New York.