Every so often I'm sent samples that truly pique my curiosity  No grocery-store red blends or cheap California plonk, but real, small production wines from tiny producers in up and coming regions. Hawk and Horse Vineyards is one of those, hailing from the Red Hills AVA of Lake County. Currently there are 18 acres under vine with the majority being cabernet sauvignon planted in 2001. The property is situated on the rolling slopes of Lake County, at elevations ranging from 1,800 to 2,200 feet.

Hawk and Horse Vineyards has been Demeter Certified since 2008 and California Certified Organic (CCOF) since 2004. Both new and used French Oak barrels are used, and production hovers around 1,150 cases of cabernet sauvignon.

Confession: I was sent the 2007 Cabernet and 2006 Latigo a long time ago, but they became lost in the samples shuffle and move to Oregon. I dug them out for our July 4th celebrations (last year), figuring that the cabernet would pair well with Becky's ribs and the dessert wine would be a pleasing accompaniment to the fireworks. The cabernet did pair quite well with Becky's ribs, by the way.

Some months later, I was sent the 2008 Cabernet to taste, and decided to post up a review of all three wines at once, in order to better offer a view of this producer. 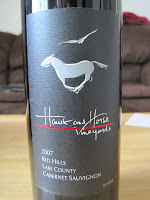 2007 Hawk and Horse Cabernet Sauvignon Red Hills: Smelling this makes me picture dry, hilly vineyards full of green-leafed vines stretching to the horizon. The day is cool but carries with it the scent of the land. Moutain herbs, black fruit, and soil all show themselves almost reluctantly on the bouquet. Unfortunately there's a touch of ethyl acetate at play too, manifesting as nail-polish. Once past that, I found this to be wound up very tightly on the palate. The firm, integrated tannin holds within it a beautiful savory blackberry and spice flavor. Roasted coffee mixes with cassis and dried rosemary in the background, bowing before the impressive tannic strength. I think this cabernet has 5-10 years before the tannin settles down. If you choose to drink now, a healthy session in a decanter will loosen the strings. SRP: $65. 14.1% abv. 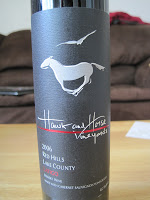 2006 Hawk and Horse Latigo: This is the dessert wine - made with cabernet sauvignon grapes - that Hawk and Horse produces. According to the label, these are biodynamically farmed organic grapes. I'm not sure what that means though. The Latigo smells like oxidized cabernet sauvignon. Maybe a comparison would be Madeira from an old bottle you've had open for a few months. Don't let that turn you off though, because taken in context, this is an interesting wine. Roasted nuts, dried red cherry, and dark chocolate make up the expressive bouquet. I liked the intense mix of cherry, spices, and chocolate that compose the flavor palette. It's at once sweet yet balanced, and doesn't show any of the 16% alcohol. If you can get past the nose, you'll be doing just fine, and I suggest pairing this with an after-dinner cheese course. $45 srp (375ml). 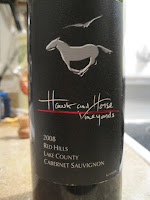 2008 Hawk and Horse Cabernet Sauvignon Red Hills: Another big, tannic beast of a cabernet sauvignon. That's not a bad thing though, as this wine has a lot to offer if you give it time to settle. Plenty of dark fruit, dusty soil, baking chocolate, and oak make up the complex bouquet. The tannin is firm and drying across the palate, delivering a wave of bittersweet chocolate, dried herb, and ripe black fruit flavors. The most glaring fault was how hollow this wine felt on the mid-palate, but luckily that fills in when you have it with food. If you must drink now, several hours in a decanter will work wonders, as will a thick, medium rare cut of steak. $65 srp. 14.1% abv.


Hawk & Horse Vineyards produce a cabernet that I think you should try, if solely to understand what kind of cabernet is possible outside of Napa Valley. Then again, trying a wine solely for that reason strikes me as missing the point, especially the point of wines like this. They're wines of the land, baring their souls as rugged, strong wines from a distinctly rugged place.

The impressive structure and sheer age-worthiness of these wines excite me. They're a bit rustic around the edges to be sure, and I think could benefit from maybe a bit more intervention in the wine-making process, but there is also a sense of beauty to each wine. Both the 2007 and 2008 beg for more time in bottle, and if you grant them such time, you'll be rewarded.

Even the Latigo, that strange beast of a dessert wine, offers a peek into the Hawkins' philosophy of life and vitality. I can't help but be impressed with this.

These wines were samples for review purposes.