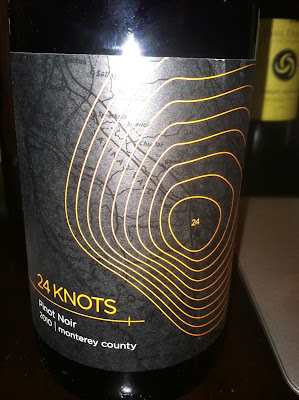 Yes, just a single wine in this blog entry. I was sent this sample bottle from 24 Knots winery out of Greenfield, California.

The story behind the name goes like this: During the summer, winds come off of Monterey Bay and down the Salinas Valley at speeds of up to 24 knots. At that speed, they provide an essential cooling effect for the vines, allowing acids to stay higher while the sun still helps ripen the grapes. From what I understand, all the grapes come from Viento Vineyard, which of course is in Monterey County.

Ok, this is not going to be a long blog. One wine to taste and the desire to keep my notes concise and readable.

On opening this pinot has a funky aroma, so I tried to give it some time to blow off. While I don't think it did entirely blow off, after an hour I was able to smell things other than funk. I like the raspberry/strawberry scent, and it had an interesting pine thing going on too, along with typically-pinot aromas of baking spice. I think if the funky sulfurous aroma hadn't lain atop everything else like a wet beach towel, this could have been a really fun wine.

So I tried closing the screwcap and giving it the Dirty Sommelier, aka "shaking the ever living s&#@ out of the bottle", for about 30 seconds.

In an attempt to re-approach the wine, I retrieved a new, clean wine glass and poured another few ounces. Drat! The same thing! This time I went in for a taste, to see just how much the funk obscured. Ripe berries, wood smoke, peppery spices, and funk. It permeated everything and was nigh on impossible to ignore.

If the 24 Knots Pinot Noir didn't have the funk, it would be a damn good bottle of wine. It's pretty inexpensive too, something like $15 a bottle. So in conclusion, if you like your pinot noir on the funky side, I think you'll dig this. If you prefer clean, bright berry fruit, maybe pass on this one. I tend to prefer the latter, so I can't recommend this to you.

Of note, the winery sent two bottles and I tasted the second bottle about two months later, it exhibited basically the same characteristics. Both bottles were tasted over the course of about three days.

These wines were media samples for review purposes.