I'm not one to like Merlot usually. They come off as too flabby, soft, unsophisticated and more. Most of the time, that is. One of the coolest things about wine is trying examples that you haven't had before. That could mean a different varietal, vineyard, producer, region, anything. So tonight I got a bottle of Clos la Chance Merlot. It's a 2006, the "Hummingbird Series" (yes I think that sounds stupid) and it's from the "Central Coast" area..Which is a big area, seriously, get out a map and look.

Temper all those negative-sounding statements with the fact that it's $4.99 at your local Trader Joe's (if you live on the West Coast, in California, and your local store has some). Oh wait, google it and see that it's $14.99 online. This is getting interesting, because on one hand we've got a wine that has a fairly neutral pedigree and a dumb sounding association with flighty little birds, but on the other hand it's cheap! I haven't even smelled our Merlot yet either, does this portend great things or just another ho-hum wine? 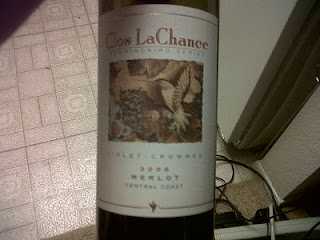 Apologies for the horrid picture, I'm too lazy to get out the digital camera and all that. Next time, I swear.


Ok so we're tasting Merlot, let's keep that in mind and also remember I'm not a fan of it (usually!)
What do I smell right off the bat? Toasty oak and blackberries mixed with moist earth. Not bad, right? I think that's a good start since I'm not getting giant notes of overripe plum and black cherry. There's something like a cranberry note, or some kind of berry that's got acidity. You could maybe call it underripe blueberries too. I think there's a cocoa note too. I'll be honest, right now I'm getting whiffs of cardboard too. Not the wet, musty kind, but dry, wine-box cardboard. Damn it! Maybe a touch of heat too but it's not much at all.

Enough of me bashing yet praising the nose, because the point of this is to DRINK the wine. On my palate I definitely pick up notes of oak, dried black cherries, soft, almost elegant tannins. Maybe a bit of leather and this hint of spice that makes me think "Wow is there syrah in here?". It finishes fast, like a sprint, and doesn't leave much to linger and make you ponder life's mysteries. The one flavor that hit me there was dried blueberries, fresh out of the bag. Color me unimpressed.

Pleasant is my best word to describe this wine. It's got none of the complexity of Old World wine, none of that class, elegance and sophistication. But it's also got none of the balanced power of a superb New World wine. Ok I've bashed the wine a bit in this paragraph too, I'm not sorry though. This reinforces why I so rarely drink Merlot. It's just not enough for me, and just doesn't give me the sensory satisfaction of other wines. Maybe it's why I tend to shy away from California's Chardonnays.

I really want to like this wine, I'm trying here! I've gone through about a glass, I've paired it with some foods and taken more notes, and it's slipped back into that softer, boring style that just doesn't excite me. It's got no flaws, it's at a really cheap price point, and it's easy to drink. Solid C+ from me. Not gonna get anything better than that because it's slightly above average wine. I'll keep trying Merlots as they come along, and if you see this for $5.00, buy it cause it's not so bad. If you miss out, don't worry, better wines are coming along.