Last year I reviewed a Chianti Classico from WineChateau.com and this year they were kind enough to send another wine my way. The 2004 Colle Dei Venti Barolo, from the Piedmont region of Italy. Tucked way up at the top of the "boot" and bordered on three sides by the Alps, a few grapes grow quite well in the hilly region.

Perhaps the most famous is nebbiolo, producing the wines of Barolo. The Barolo wines of Piedmont are considered to be some of Italy's best and I count them among my favorites as well. Traditionally they are very intense, tannic reds that need at least ten years before they're suitable to drink. Some stuffy old English critic once declared that a Barolo must be at least 30 years old before it's ready to be consumed. Having tried a few 30+ year old Barolo wines once, I can say that with that much age, they take on the complexity of a great Bordeaux. 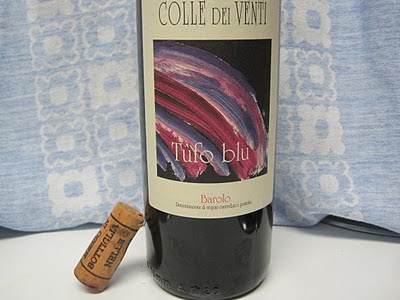 (img copyright Beau Carufel 2011)
However! There is a new movement afoot, one to produce Barolos that do not require a prohibitively long time before being ready to drink. Given the following evidence, I suspect that is what the 2004 Colle Dei Venti is aiming for. First the color is not what I was expecting. Next, upon a few whiffs, the aromatics didn't seem to be typical of the Barolos I had enjoyed previously. Finally, I tasted some somewhat subtle differences between what I expected of this Barolo and what was present. None of those factors should be construed as good or bad, just my observations regarding this particular wine.

Professionals describe Barolos as lightly colored, almost ruby-like when young. When looking at the Colle Dei Venti, I must disagree. It's far closer to a cabernet from California or even a Cotes du Rhone. Dark and opaque, not at all ruby-like. Truth be told, I was hoping for a wine with a lighter color because lately all the wines I have seem to be somewhat monochromatic.

Despite a lackluster or less-than-awe-inspiring color, the Colle Dei Venti does display complex aromas of spice, sour cherry, tar and rose petal. Some scents are stronger than others but what they combine to create is a wonderful bouquet. Consider me impressed.

Today I decided to take a somewhat different approach to tasting and opened the Barolo about three hours before I tasted it, then poured it through a vinturi to maximize the aeration. The wine makes an impressive entrance, bursting with spices and tannic structure. It's got pepper and a savory, almost jerky-like note too. But oh those tannins, so strong and dominant. I can easily picture this wine being far less imposing in another five years, maybe even ten. At 14% alcohol, there's a bit of heat right on the finish that perhaps will disappear with age, all the more reason to drink aged Barolo I suppose.

All of the above taken into account left me with the singular thought that I really enjoyed the 2004 Colle Dei Venti Barolo. It's complex, big, brawny, and has potential. Sure it's rough right now but with some mushroom/truffle ravioli with shaved Parmesan on top, I bet this would be a knockout. The classic pairing of tannin and protein (think red wine and steak) would also be beautiful and an exercise in the yin and yang of food and wine. B+ from me, a BUY recommendation if you see it anywhere. WineChateau.com looks to be sold out (for now?) but if this is any indication of the Barolos they procure, you need to check their site out.

This was received as a sample for review purposes.