Last night I had a fantastic meal at The Country Cat here in Portland. As a recent emigrant to this city, I've been excited to start exploring the highly regarded restaurants in the area. Living in Beaverton, I'm a short drive into Portland yet also live in a neighborhood that has it's own hidden gems. As I continue to get settled and explore, I'll be writing about some of those cool places to. 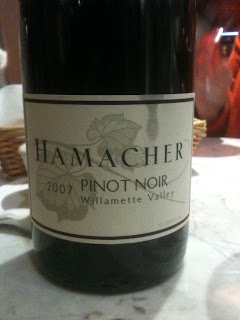 For now though, let's start with the amazing dinner my friends and I had last night. I was downtown with Becky, meeting with the always-wonderful Karin McKercher to discuss some business (I'm still looking for a job remember!) and while we had a couple of delicious bottles of wine, including a 2006 Belle Pente Estate Reserve pinot noir and a 2007 Hamacher Willamette Valley pinot  noir, there wasn't any food to be seen! I did really enjoy our venue though, Oregon Wines on Broadway. Great selection, nice staff, and good pricing make this a wine bar I'll be visiting often. 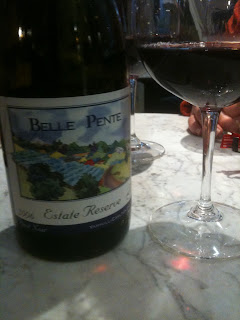 Naturally, after the three of us polished off those two bottles (both of which were quite good, earning a B+ and an A- from me, respectively), my thoughts turned to food. That always seem to happen, but I've no complaints. Becky found out her friend Anna was downtown too, literally blocks away. Anna writes a great food blog, one I highly recommend you foodies check out. She was entertaining H.C., a fellow food blogger from Southern California. Karin took off and the four of us turned our attention to getting something into our growling bellies.


The first place we stopped at, The Woodsman Tavern, has just opened and had an hour wait..minimum. Plus, it looked like every other pseudo-speakeasy run by hipsters with scraggly beards, too much pomade, and tattoos of sparrows on their arms. I rolled my eyes and figured it just wasn't my scene. My jeans weren't tight enough and I wasn't wearing plaid.

Anna then suggested The Country Cat, a short drive down the street, further into Southeast Portland. This neighborhood, called "Southeast" by the natives, is considered an up-and-coming hip place to be. Lots of gastropubs serving nouveau-American comfort food. Take that for what it's worth, I am always skeptical of restaurants that market themselves as such.

Walking into The Country Cat, we saw the place was not crowded and had plenty of open tables. A nice selection of liquor and wine was mounted above the bar, and there was a chalkboard listing beers on tap as well as their "liquor in a jar" special. Our server, Brian, came over quickly enough and we began to order. Anna and Becky led the way, ordering the pretzels to start, while I took a moment to peruse a nicely organized beverage list.

As we sat and chatted, Brian came back with our first wine, a 2010 Grochau Cellars Commuter Cuvee pinot noir. The night before, I tasted this wine with my friends Dan and Chas of Wine is Serious Business and we all enjoyed it. The Country Cat charged $31 a bottle, retail price is around $18 or so. That is how restaurant wine pricing should be. Unfortunately, I saw a bottle of 2010 Bonny Doon Clos de Gilroy for $41 when I believe it sells for $18 off their website. Kind of a bummer that it cost $10 more than the Grochau, yet retails at the same price. 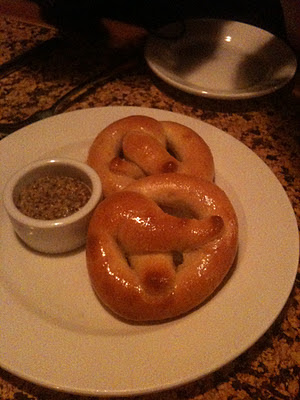 The pretzel was good, it needed more salt on top but had a nice crunchy outside and a warm, soft doughy interior. The portion size was good for two people but I think we should have ordered two. Perhaps other dipping options can be offered too, as I think that a spicy deli mustard would have been a better choice. Still, this was something I'd order again. 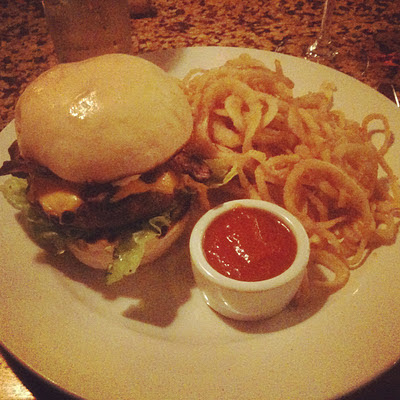 Becky brought up that the hamburger at The Country Cat is apparently noteworthy and has been featured locally as one of the best around. Since I'm a bit of a burger fiend, this naturally resulted in me placing an order for the burger, replete with American cheese and bacon. Again I will suggest more variety, this time for the cheeses available on the burger. I may sound snobbish, but a locally produced, artisan cheddar would be an amazing complement to the burger. And what a burger it was! Look at that picture! A bit too much mayo perhaps, but that was made up for by the fact that the burger was cooked to a true medium-rare. Thank god, a restaurant that can do that! The meat to bun balance worked out, and the bacon had a great crunch factor, providing a foil to the rich beef. You Portland burger fans, check this place out.

Those onion rings were epic. As was the catsup, perhaps the most natural-tasting version I have ever had in my life. This plate was so full of epic goodness that I nearly ordered another one. I never do that. Reveling in the meaty glory that is this burger was perhaps Portland's way of saying "welcome kid, it's gonna be a fun ride" to me.

What is a great meal without a great dessert? Check out the picture below, and drool for a while. 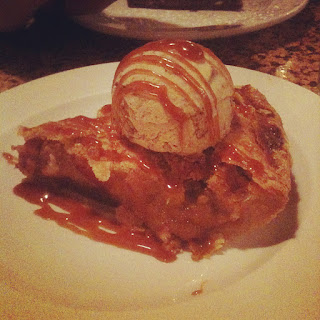 Apple pie, almost always incredibly good and a perennial favorite of mine, topped with pecan ice cream and drizzled in caramel. At this point, my synapses began to overload, screaming "this just isn't fair!" at me. But like a champ..or like a boss, I dug in. Great balance between sweet, rich apples and flaky butter crust, and the ice cream had a bit of dry nuttiness which was complemented nicely by the sweet caramel drizzle.

Apologies for the terrible picture quality. Anyone want to give me $100 so I can go buy an iPhone 4? Yea, that's what I thought. Still, I hope you enjoyed reading about my first big culinary adventure in Portland. Thanks to Becky, Anna, and HC for sharing a great night with me. Thanks to Karin for showing me a wonderful new wine bar right in the heart of Portland. This is the start of a great adventure for me.