Today arrived way too early in Navarra because we (the "#Navarra5") were out eating a stunningly good meal until 11:30pm the previous night and I didn't fall asleep until 12:40. My alarm went off at 7am, when it was still dark outside in Pamplona. Luckily the jet lag either hasn't hit me or won't hit at all. After discussing it with Ward and Mike, I think it may have something to do with the arrival-night's festivities. Those activities helped re-set my body clock to Spanish time, which is nine hours ahead of San Diego.

Breakfast was quick, we had to meet downstairs at 7:45am to get a start on the day's activities. Our schedule consisted of visits to wineries, tastings, a huge lunch (more on that later), and a walking tour of Pamplona. After that, another sumptuous dinner was scheduled but that ended up being cancelled in favor of more pintxos! Instead of boring you with words, and in the interests of keeping things concise, I'll post some pictures below.

After about an hour, we began with a tour and tasting at Malon de Echaide. This is a cooperative of growers, around 200, that grow then sell their grapes to the Bodega, which makes wine to sell. We spent some time touring the cellars and tasting their wines, all were great examples of why wines from Navarra are QPR smashers.

After tasting and the tour, we headed to another winery, Finca Albret, to taste a different style of Navarran wine. At Albret, the emphasis is on expression of terroir, letting the grapes do the talking. Perhaps the biggest difference between Albret and Malon de Echaide is that Albret owns all it's land, controlling literally every step in the winemaking process. As a result, the winemaker and oenologist can work together to ensure optimum ripeness levels in the vines before they're harvested.

After this tour we headed to lunch to gorge on more awesome Spanish foods, including fresh vegetables grown right in Navarra. Unfortunately I failed to take any pictures during lunch, my bad. Two days and two big lunches made it clear which meal is the "big meal" of the day As such, getting used to eating a six course lunch, complete with wine, then dessert is in fact difficult. But that isn't to say that I'm not having fun trying! 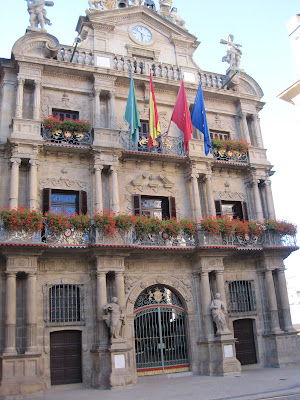 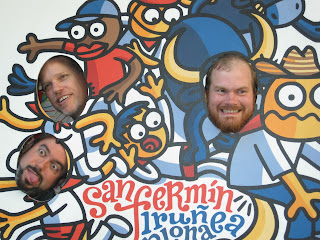 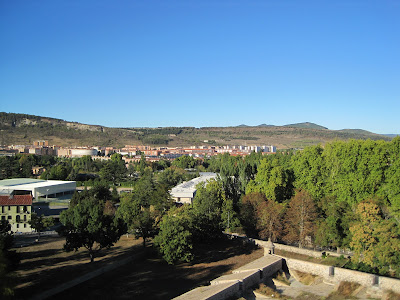 Following the giant lunch, our group loaded back up into the rented van and drove back to Pamplona (roughly an hour away) to take a walking tour through the heart of the city. For me this was a highlight of the trip (yes, my interests go beyond wine) because I got to see some real, live history. The pictures above and below highlight the amazing things we saw as we walked the route of the Running of the Bulls, saw the ancient city walls, and even witnessed Basque musicians.


Returning to the hotel tired, still full, and maybe even a bit thirsty, I sat at my computer and began to compose this blog. We had a long day and will be up and at it tomorrow for more winery visits plus an old church and town. Seeing this history somehow makes the wine mean something more, the buildings are a part of the land and have been here in the first vineyards were planted, could we consider them somehow part of the terroir? A romantic notion perhaps, but Spain has given me a heady sense of romance so far.

I didn't finish this blog entry before bed, so what you're reading now was composed a week after I returned home.

As I look back, Day Two of the Navarra Wine Adventure was everything I had wanted out of the trip. Touring the vineyards, tasting the wines, and learning the history of the place I was in checked off the three main "needs" I had for this trip. Since the trip, I have become even more interested in visiting wine regions and reporting back what I find. Perhaps the beginnings of a wine journalism career were formed in Navarra, drinking wine.