This Christmas, I brought wine to the Kramer household. For Thanksgiving and now Christmas, I  revel in the opportunity to serve bottles I wouldn't normally open, bottles that are suitable for the occasion. It's not that the Kramers don't have enough wine, but that I seek a somewhat perverse satisfaction in presenting wines to them and gauging my palate based off their reactions. As much as I preach "trust your palate", often I am just as guilty of second guessing myself as the next person. 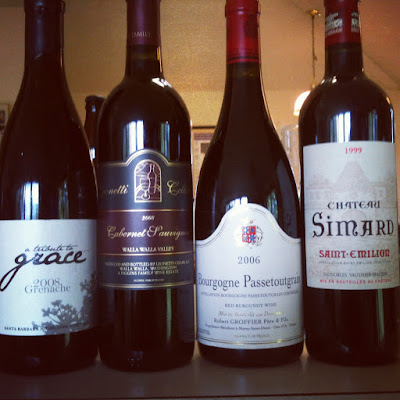 This is the lineup, a set of wines that represent some of my favorite regions around the world. The four are:
2008 A Tribute to Grace Grenache from the Santa Barbara Highlands AVA.
2008 Leonetti Cabernet Sauvignon from the Walla Wall Valley AVA.
2006 Robert Groffier Burgundy from the Passetoutgrains AOC
1999 Chateau Simard Saint-Emilion AOC

Each of these had been acquired over the past year or two via the internet or local wine shops. The prices ranged from around $20 all the way up to $100. With the exception of the grenache, I had not tasted any of these wines before, but have had other examples from either the producer or region. 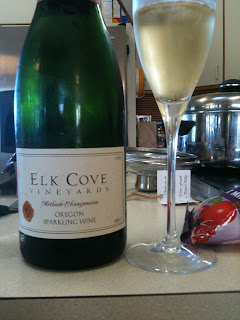 First though, some sparkling wine from the Willamette Valley. This Elk Cove beauty was picked up by Kim Kramer a few days ago when we went tasting up and down the Willamette. The base wine was made in 1999 and bottled in 2000. In 2010 it was first disgorged, and when it's gone, it's gone. To my knowledge, Elk Cove hasn't made any more vintages of sparkling wine since.

How is it? In a word: wonderful. Although it's not as yeasty or doughy as a lot of Champagnes, it retains a bright crispness and layers of apple, pear, lemon zest, and a hint of apricot. Despite sitting on the lees for a decade, there isn't a lot of creamy weight to the wine, something both Kim and I found very interesting. The bubbles are small and uplifting, just like in a real Champagne, providing excellent mouthfeel. For about $30, this is one of the tastier domestic sparkling wines I've had in 2011. Only 200 cases were made, so it's best to purchase some now before it's all gone.

Moving on to the wines we had with the meal:

2008 A Tribute to Grace Grenache Santa Barbara Highlands: Already on my list of top wines I tasted in 2011, this grenache didn't disappoint. Sourced from vineyards over 2,500 feet high, the wine is the color of fresh-pressed strawberry juice. It's moderately opaque too, indicating it's unfined and unfiltered. The nose is redolent of raspberry sorbet, rose petal, wild strawberry, and black peppercorn. Initially there's a burst of acidity layered with raspberry, that recedes quickly into cracked pepper that sweeps the insides of your palate. Strawberries, wild and a touch green, bring the mid-palate through to a sour-cherry laden finish. All the ripeness is tempered by the acidity, balancing this wine out perfectly. My only regret is that this was my last bottle of the 2008.

2008 Leonetti Cabernet Sauvignon Walla Walla Valley: I bought some bottles of this in the Fall, intent on aging them for many years, but I also reasoned that a bottle of wine that routinely goes for $100 should be pretty awesome right now. This is one of Washington's cult wineries, and the cabernet is routinely awarded huge scores from the print rags. 2008's Leonetti cab is a blend of 77% cabernet sauvignon, 16% merlot, 4% carmenere, 3% malbec. I decanted this for several hours, reasoning that despite it's youth, a decanter would help bring out some great flavors. I was wrong. Aromatically pleasing with notes of tobacco, cassis, tar, and black fruits built anticipating for an equally complex palate presence. Sadly, this wine was flat out boring to drink. Lots of sloppy black fruit up front, a somewhat hollow mid-palate, as if the wine evaporated, and a finish so oaky that it felt like someone dragged a vanilla-soaked cedar plank across the back of my tongue. If this is something that gets high scores, it's a mystery as to how. I'll probably age the other bottle I have for a few years but this is a lesson: don't always believe the hype.

1999 Chateau Simard Saint-Emilion: I paid $20 for this wine at San Diego Wine Company back during the summer, so I had appropriate expectations. However, there was an undercurrent of excitement that I cannot deny feeling, since most of my Bordeaux are far younger and not yet ready to drink. The chateau dates back to the 17th century, and the current ownership ages their wines for around 10 years before releasing them.  According to my research, this is 70% merlot and 30% cabernet franc.  It opened up nicely in the glass, with an earthy, cherry and bittersweet chocolate nose that also had some spices and a whiff of brettanomyces. Some call that terroir, others a flaw, but it wasn't horribly overwhelming to me. On the palate I picked up the cabernt franc's tannin structure, framing a cherry/leather/herbal/raspberry flavor profile. It had very nice mouthfeel and I suspect it could even age longer, perhaps till 2015 or so. I'm pleased with this purchase.

2006 Robert Groffier Bourgogne Passetoutgrains: I should have figured an '06 could be over the hill. Passetoutgrains from Burgundy contain pinot noir and gamay and are usually meant to be consumed within two years of production. I took a gamble, read on to find out how I got burned. The volatile acidity was powerful, almost smothering an undercurrent of cherry-soaked minerality and some barnyard funk. Beyond the VA issues, a dollop of ripe red cherry sat squarely in the mid palate, bounded by a little bit of (good) acidity. More of the barnyard came through, but compared to the VA problems it wasn't bad at all. A somewhat clean finish was laden with chalky minerality and sour cherry notes. Unimpressive wine and at $26, also overpriced. It went down the drain.

Strictly speaking, I went 1 for 4, batting a whopping .250 on Christmas Day. That's not exactly where I want to be. I still struggle to wrap my head around the Ch. Simard because it was interesting wine, just a little boring. Good Bordeaux has a certain palate presence, one that Bordeaux lovers immediately know. While this Saint-Emilion was good, it could have been more smile-inducing. While I would buy the it again, I wouldn't pay over $25 for it.

The Leonetti does confound me as well, it's just so atypical of what I expect from a high-scoring Washington wine. I know my palate is different than Paul Gregutt's, as well as all those who criticized me on Twitter for not loving the wine, giving it enough aging time, or other "helpful" advice. On the day I tasted it, the 2008 Leonetti cabernet was not very interesting wine. Winemakers can do a lot with heavy extraction techniques and oak barrels, as well as acid addition and tannin manipulation. What they cannot do is create a wine with soul, one that touches your palate. 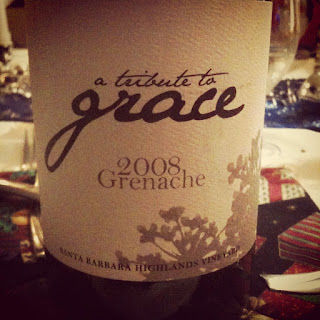 I could wax poetic about the A Tribute to Grace, but what's the point? You can't find it anywhere and as far as I know, the last magnum was snapped up a couple of days ago. Don't ask me how I know that, of course. Luckily the 2009 is available and you should buy as much as you can. One of the best wines I tasted in 2011.

The Passetoutgrains was shit, plain and simple. It didn't hurt my feelings for Burgundy though, just reminded me that even self-important wine bloggers occasionally get burned.

With that, I wish you all a Happy New Year, see you in 2012! Let's drink some great wine together!