Can We Taste Colors?

An interesting discussion arose about five days ago when I was trying to explain how a wine tasted to a friend of mine. We were drinking a 2006 Pinot Noir from the Russian River Valley. I won't name the producer but suffice it to say it's about $50 a bottle and they consistently score in the low 90's from Wine Spectator and Robert Parker. I'd never had this wine before but knew it's reputation and he was a big fan.

We had opened the bottle about an hour prior and were excited to give it a shot. As soon as I tasted the wine, I told him "Dude! This wine tastes red to me, I like it". He was surprised and said "What do you mean, red? Do you taste some red fruit?". I was adamant, and told him "No, seriously, this wine tastes red, that's what my palate is telling me right now". In my mind, I could only ascribe the flavors to the color. It's hard to explain, but as soon as I sipped that first little bit, my senses screamed at me "this is red!". In my mind's eye, I saw red, in dot form. Cool dot, isn't it! 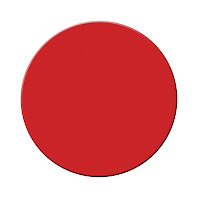 The debate continued and he asked me if I'd ever tasted colors in wines before. I told him about a 2005 Amon-Ra by Glaetzer that tasted deep blue to me, and a wonderfully dry 2006 Airlie Muller-Thurgau from Oregon I had a few years ago that tasted like light, lime green. Each time this has happened, the first instance of sensory perception has been a color, not a flavor. 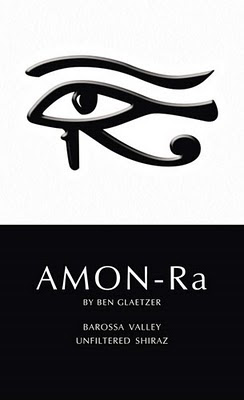 My theory is that there's something going on with my perceptions of fruit notes and how they interact on my palate. Perhaps it's sensory overload, too many flavors manifesting and therefore my brain takes a step back and throws a color at me instead of trying to discern each flavor individually. Maybe I'm seeing red fruit notes as a color because I'm not focused enough, my neurons are working on something else up in my head.
Back to the Pinot Noir, I was eventually able to search out some more traditional flavors. The wine itself never tasted off or like it didn't have ripe fruit, lively acidity and a touch of oak. I just saw and thought "red!" as soon as I sipped it. Meanwhile, my friend was happy with his wine and enthusiastically described what he tasted, which could be described as a normal set of flavors and textural notes. The Pinot rocked, I hope there's some left and I may review it at a later date.
I don't know if he agreed with me or thought I was full of shit, but he's still my buddy if that says anything. He'd never experienced anything like I was trying to describe.
The discussion was interesting and I have been thinking about it for a few days or else I wouldn't have written this post. Has anyone else ever tasted a wine and been able to relate it to a color or shade versus a set of flavors? Was it easy or hard to do? I've heard of people who hear sounds as colors, that's pretty awesome. This isn't the same thing because it doesn't always happen to me, in fact it's very rare that I drink a wine and think of colors versus specific flavors.
One day I hope I can taste a wine that makes me think of a lot of colors, hopefully it'll be something ridiculous like a 1990 Romanee-Conti or 1947 Cheval Blanc. Now that would be interesting, maybe I'd just pass out and you'd see that old Windows "Blue Screen of Death" in each of my eyeballs as my brain reset itself.
Interested to hear your thoughts.
Beau Carufel
By Beau at 5:14 PM