I'll preface this food post by saying do not try this at home, I'm not a professional, I just love cooking. Are we cool? Good.

So this evening, I got the itch to cook. Within the domain of my fridge are the things you will see in the pictures below. A lot of the ingredients tonight were leftovers or things that you wouldn't normally associate with dinner. Why not then turn the tables and create dinner from breakfast and lunch foods?

Luckily, I had tortillas. That saved the day, no lie. Had I not had those, this blog post would be one of me begging, pleading even for someone to bring me or send me food. Wine too! Now that I think about it, my wine fridge is running suspiciously low, that's a bad sign.

Enough about me, let's check out what I did tonight in the kitchen - besides making it dirty and stinky. 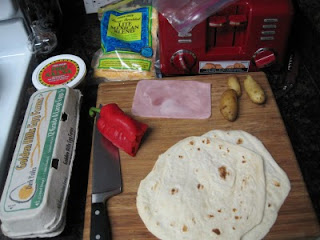 Here we have some of the raw ingredients for my meal. No, the corkscrew isn't an ingredient, it's for opening delicious things like wine and beer. I just realized too that everything I created this meal with was bought at Trader Joe's. Go me!

Why oh why did I buy Lite Mexican Blend though? Since I've now gone about 13 days without red meat, maybe I blacked out and accidentally bought the low-taste..er...low-fat version of my preferred shredded cheese blend. 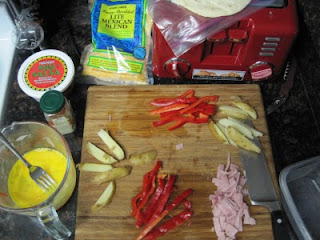 I cut up everything into small bits, the better to fit into a tortilla. You have had a burrito before right? Great, there goes my international readers, moving on to a better blog like 1WineDude's.
So what you see there is:
Fingerling potatoes
Red bell peppers
Sliced ham
Two eggs
Cayenne powder
Lite Mexican blend shredded cheese
Mild salsa (more like a pico de gallo actually) 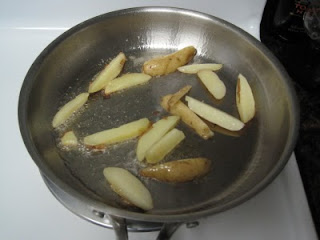 What I did was add some grape seed oil to the pan and let it heat up, then toss in the sliced up potatoes. The objective was to get them fried and crispy, to add both a flavor and textural component to the burrito. This is where I added cayenne powder but in hindsight, I should have also added some to the eggs when I cooked them up. Next time. Before I forget, at this point you should add salt and pepper, I neglected to do that. 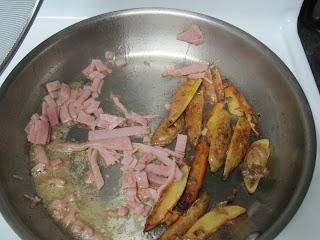 While the potatoes cooked up all nice and brown, I felt that adding in the ham would speed the process. That means I could eat faster, which was my priority.

My stove (or pan) apparently has a gangsta lean to it, making things easier in this case. I moved the spuds to the right, out of the pooled oil and in their place went the ham. That stuff jumped, crackled, browned, and smelled absolutely delicious! YUM! 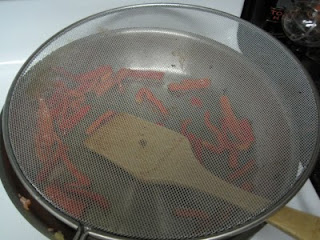 This was supposedly a splash guard. Yea right. Total b.s. I still had to clean up a filthy stove-top after my cooking session. Not that I mind because it signifies I've done something in the kitchen and well, I'm used to it. Making messes seems to be my specialty. One day I'll make better food than messes though, so stick with me!

What you see are bell peppers cooking up ever so nicely. If you don't like bell peppers, just don't add them in, but I love the things especially after browning them up real nice. Add salt here too by the way. 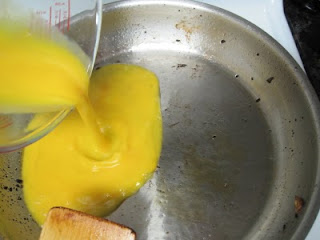 Action shot of me pouring eggs into a pan! Beyond that there isn't much to say about this picture. Just remember, add some seasoning at this point but not too much! I think that garlic salt might add an interesting dimension, next time I'll be trying that too. Oh and I drained the oil, probably a wise move on my part (a rare occurrence in itself) 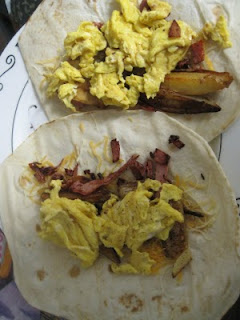 The eggs took literally 30 seconds to cook, the pan was that hot. Plus I absolutely hate over cooked eggs, it's an insult to how delicious eggs can be.

I transferred the eggs to the tortillas. I'd prepped them by adding a bit of cheese then the potatoes and ham from earlier, thus heating and partially melting the cheese. My intent was to fully melt the cheese once the heat of the eggs made contact with my lite cheese. Still can't believe I bought that crap.

I have a confession to make..I'm out of hot sauce. Please don't be mad, I'll rectify the situation as soon as I can. At this point, add Tapatillo or Cholula brand sauce. Or whatever you want. Had I been smart, I'd have bought some fresh jalapenos and put them in too. Just gotta remove the seeds first. 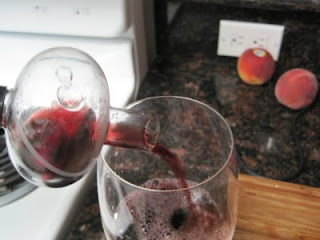 This one's easy. 2007 Toasted Head Sonoma Coast Pinot Noir. Delicious! Balanced spice, lively acidity that washes across your palate. Nice fruit and silky but subtle tannins. Since this is what I had open, I decided to go with it instead of opening up something else.

What wine would you pair with the dish I created tonight? Red? White? Rose? Bubbles? I'm not sure what I'd pair with it but the Pinot went well or so I thought. Those peaches are going into a peach margarita tomorrow, thanks to my friend Anthony (@acfoodandwine) for that suggestion! 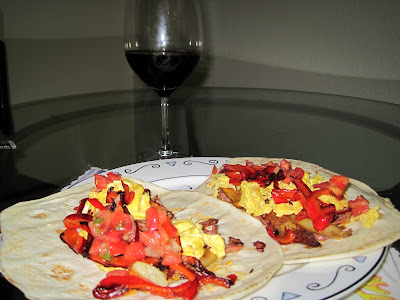 There you have it, my leftover-breakfast-style-burritos. And a glass of wine. There are those elements I'd add, nothing I'd subtract. Taste wise, I really liked all the flavors together. Texturally, it was wonderful with the crispy potatoes and ham, soft eggs and slightly chewy tortillas. The cheese and bell peppers were great complements to the aforementioned ingredients. The result was a lot better than my previous attempt at food-blogging, where I nearly burned down my kitchen.