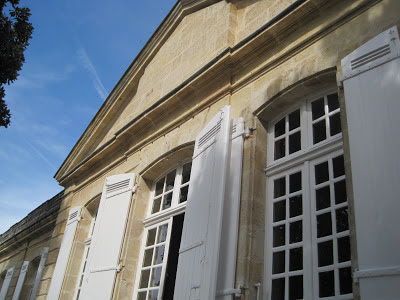 The airplane gently shuddered as it descended through the clouds, waking me from an hour of fitful sleep. In another few minutes I would be setting foot in Bordeaux, the most famous wine region on the planet. Ten hours behind, my body clock struggled to understand why the sunlight streaming through the windows was on the wrong side of the sky. A brief moment of disorientation passed quickly as my brain hit the fast-forward button, speeding through the airport back home in Portland, another, more cavernous one in Amsterdam, and the little twinjet delivering me into a small airport in southern France.

Twin bumps signaled the wheels meeting the tarmac, twin bumps in my chest betrayed my heart skipping a beat or two. My still-groggy brain had enough clarity to say "wow, I'm really here" before I scanned the cabin searching for the other members of the party I was going to spend the next five days with. We, the collective "we", disembarked into a warm and humid September midday. Two of our party, Michelle and Tracy, were in from San Francisco, Jameson from Seattle, and me from Portland. Joe was inbound from Philadelphia and our fearless leader, Mike, was on a later flight from San Francisco. 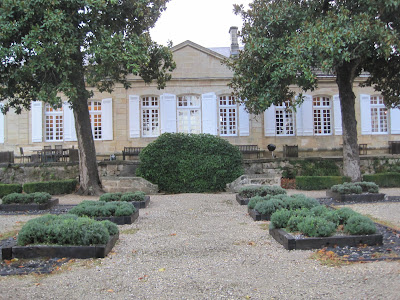 We were guests of Planet Bordeaux and Balzac Communications, we wine bloggers and wine professionals. For the next five days this little group would be exploring a slice of the Bordeaux region. We'd be eating, sleeping, drinking (of course!), and learning all we could. I suspect we all had some preconceived notions about this trip, what we'd see and do, what we'd drink and eat, and what we would come away with. You'll have to check with the others for their thoughts though.

Andre, a tres cool Dutchman, was to be our driver for the week. He picked us up from the airport and whisked us off to Chateau Sainte Barbe. This gorgeous 18th century Chateau would be a place to rest and refresh for a few hours. We had to still wait for Joe and Mike to arrive, then we'd get going to dinner at another local Chateau. 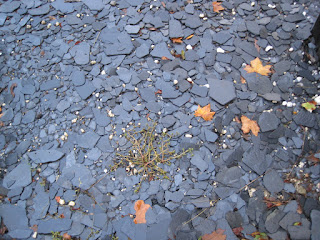 As our van pulled up the narrow, crushed limestone driveway to Chateau Sainte Barbe, my eyes tried to devour every element of the house and grounds. It was unlike anything I'd ever seen before, in person, but the immediacy of the moment fulfilled my visions of Bordelais Chateaux perfectly. Broken slate, glowing blue-gray in the light, marked paths around the front yard. Stone planters held a mixture of rose bushes and vibrant green bushes.

Inside, the house felt old, lived-in, and comfortable. There was no stuffy atmosphere, but to call it "classy yet casual" seems to debase the entirety of the elements. It was a home, a place to inhabit, not merely some monument to centuries past. Our hosts, Lucy and Antoine, showed us to our rooms, the men in one wing and the ladies in another. After an adventurous shower and much wiping of the floor, I felt refreshed enough to remain vertically oriented. Jameson too, but the ladies crashed for a few hours. 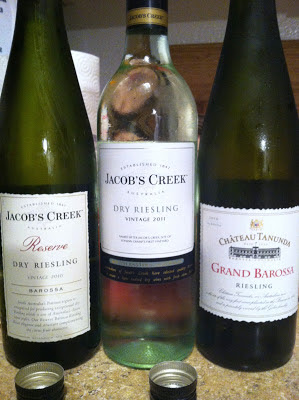 Riesling isn't the first thing you associate with Australia, to say nothing of wine from Australia. There is a surprising amount grown on that continent though. I had a few samples from some bigger producers sitting around and decided to open them all at once to do a mini exploration of the Barossa region. Three wines isn't enough to form a working knowledge of Aussie riesling but it's still important to pay attention to similarities across each wine.

First, some history. According to historical records, riesling was first planted way back in 1838 in the New South Wales territory. From then until the 90's, it was the most planted white variety. Chardonnay took it's place during that decade. Figures. These days we can find rieslings at almost every price point from Australia, and the grape is finding success in the Eden Valley area, where the cooler climate helps keep that ever-important acidity alive.

One of the themes that carried through each wine was how the citrus elements - lemon and lime - dominated the flavor palette. My experience with German and Pacific Northwest rieslings has mostly held the citrus elements as more integrated, contrasting against stone fruit richness. Not so in Barossa, where these three all showed strong citrus with only the barest hint of stone fruit flavor.

2010 Chateau Tanunda Grand Barossa Riesling: Lemons and limes on the nose, flint, and a bit of white flower. Pleasantly dry on the palate with plenty of acidity that highlights flavors of lemon and lime, stone fruit, and a tiny bit of minerality. While not complex, this is still a fun, refreshing white wine that would pair nicely with lighter fare. 11.5% abv. $11.99 srp.

2011 Jacob's Creek Dry Riesling South Australia: Very simple aromatically. Citrus and hints of stone fruit with not much else. Similarly basic on the palate with bracing acidity. I liked the purity of flavor and the clean finish, which was decently long even. There simply isn't a lot going on here and it shows, but for the price it's certainly of good quality. 11.4% abv. $7.99 srp.

2010 Jacob's Creek Reserve Dry Riesling Barossa: Opens with aromas of petrol, struck match, lemon, and lime. Secondary aromas of white flowers come through after the wine has been open for a bit. I like the mouthfeel, dry but not straining to be austere. Plenty of flavor in the form of stone fruit, lemon, and lime all come through. Out of the three, this is the most complex and pleasing. 12.5% abv. $12.99 srp.

I wasn't sure what to expect with these wines but they pleasantly surprised me. I'd happily drink the Jacob's Creek Reserve because it's so fun and zesty. I admire Jacob's Creek for keeping quality high despite producing a veritable ocean of wine. If you are looking for inexpensive yet reliable riesling that is just slightly off the beaten path, these might be for you. Consider them a good introduction to one of the many facets of the grape.

These wines were media samples for review purposes.