(Washington, DC)—Given the lack of representation of wine consumers, it should be no surprise that when states revise their laws concerning access to wine, beer and spirits, consumers are left out of the conversation. Meanwhile, new laws and regulations represent the interests of the alcohol beverage trade, not the consumers. Today, with the founding of the American Wine Consumer Coalition (AWCC), wine consumers are given a voice. The AWCC website is located at: http://www.wineconsumers.org

The American Wine Consumer Coalition is a non-profit 501c4 organization dedicated to representing the interests of the nation’s wine consumers in state houses, on the federal level, and with state alcohol regulatory commissions—all institutions where consumers have never before had representation nor a voice in deliberations concerning consumer access to wine. Additionally, the AWCC provides its members with a variety of benefits to aid them in their wine appreciation and education, from discounts on wine education, wine journals and wine accessories to access to wine events across the country.

“In 2011 Congress held hearings on a bill (HR 1161) that, if passed, would have fundamentally and negatively impacted consumer access to wine, yet not a single consumer was invited to testify before Congress,” notes AWCC President David White. “While this was not the first nor the last time those most impacted by these kinds of deliberations were shut out of the conversation, this is when it became clear to a number of wine consumers across the country that their voice is ignored, and that something needed to change.”

Today, numerous states block consumer access to wine and the ability of consumers to enjoy a simple bottle as a result of a variety of archaic and protectionist laws that serve special interests, but not the basic interests of wine consumers:

Among the issues that are high on the AWCC’s agenda are legal consumer access to wine via direct shipment, grocery store wine sales and privatization efforts that take the government out of the business of selling wine and putting it into the hands of the much more responsive free market. “Lawmakers, the alcohol trade and the media are not accustomed to hearing from the consumer when issues of access to wine are discussed,” said White. “That needs to change. It’s simply irresponsible and unfair to continue down the road of ignoring wine consumer interests and looking out only for those members of the industry who have long gamed the system in their favor.”

Chianti wines suffer from an image problem here in the United States. The consumer perception of low quality, fueled by an ocean of cheap Chianti in reed-wrapped bottles has hurt sales. Within Chianti the need was recognized to educate consumers in order to change their perception. Millions of bottles of the cheap stuff still make it here, but there's another side to the region, a more serious side. *cue serious music* 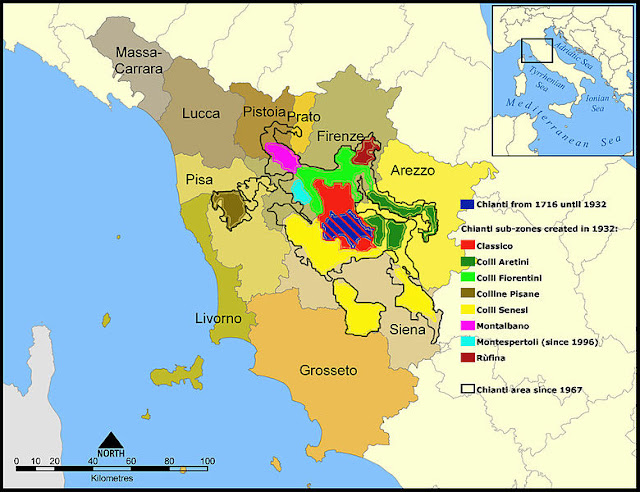 Without getting too deep into Italian wine law, it's important to note that there exist several regions within Chianti, and the one we are discussing here, Chianti Classico, is one of the most significant. Within Chianti Classico lie the historical boundaries of the region, as originally laid out in the mid 1800's.

Right now, there are several grape varieties allowed in the production of Chianti (and Classico) wines. Sangiovese is the dominant, as you probably already knew. In fact, it only recently became legal to produce a Chianti with 100% Sangiovese. Since 1996, the blend for Chianti and Chianti Classico has been 75-100% Sangiovese, up to 10% Canaiolo, and up to 20% of any other approved red grape variety such as Cabernet Sauvignon, Merlot, or Syrah. White grapes are currently banned for use in Chianti wines.

Ironically the quality control issue reared its head with regard to the samples of Chianti Classico I received. Out of maybe 9 bottles, two were badly corked, two had serious Brettanomyces contamination, and one smelled of nail polish remover. Those of course did not get reviewed, but it's clear still more work is needed in the cellars. 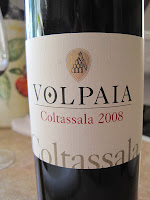 2008 Volpaia "Coltassala" Chianti Classico: Warm oak tones dominate the nose at first, overshadowing more subtle aromas of red fruit, herbs, and red earth. On the palate, medium acid and soft tannin work nicely with tart red cherry and plum skin, dried herb, and a finish of smokey game meat. The acidity really shows through on the finish too, where it creates a nice drying effect, readying the palate for another bite of food. *Highly Recommended* 13.5% abv. $50. 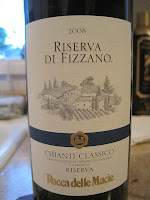 2008 Riserva di Fizzano Chianti Classico Riserva: The nose has a lot less oak than the preceding wine, but replaces that with a dominant confection/cherry and dry leather thing. Some VA is present too, but it's not distracting and adds a rustic air to the palette of aromas. Flavors of red soil, tart cranberry, dried herbs and spices, and oak barrel all meld together to create a pleasingly complex, dry Chianti. This has a lot of structure and is just a baby, but has also some great potential. 14.5% abv. $30. *Recommended* 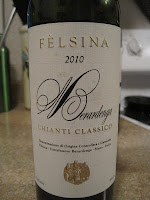 2010 Felsina "Berardenga" Chianti Classico: Oak and soft black cherry notes jumped out at me right away. I also picked up red Jolly Rancher and pepper notes. This, just by the smell, seemed like a very young wine. It's dry and soft on the palate, with plenty of tannin that partially obscures tart red fruit, peppery spice, cinnamon, and soil flavors. I suspect this is a wine to either decant now or just wait a few years on. Great acidity should hold everything together for several more years. 13.5% abv. $18. 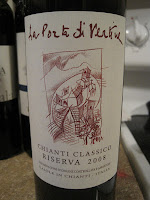 2008 La Porta di Vertine Chianti Classico Riserva: Shows some brett in the form of smoked meat and band-aid, also some dark fruit - think black cherry and plum. Out of the four I opened, this had the most black fruit compared to the redder orientation of the previous wines. It's also got some considerable oak influence from the mocha notes I picked out too. Nice drying tannin but a curious lack of acidity left me somewhat confused. There isn't much on the palate beyond bitter grape stem and more mocha notes. Somewhat disappointing. 14.5% abv. $50.

The above wines are not cheap, save for the Felsina, which is very reasonably priced for the quality. The more I thought about these wines, the more I concluded that they are not QPR winners by any means, but that a couple of them were quite good and the 2008 Volpaia was excellent. Still, as a wine lover and someone who spends a significant portion of his income on wine, I still cannot say I would buy Chianti Classico over a Brunello di Montalcino or Barbaresco. On the other hand, if you are smitten with Italian wines, these could be very reasonable prices to get wines which are, according to the law, higher in quality.

These wines were media samples.