I think I have had this sample for something like a year. How sad! I should first apologize to the poor PR person who sent it to me. Also, the current vintage is probably 2011, or even 2012. 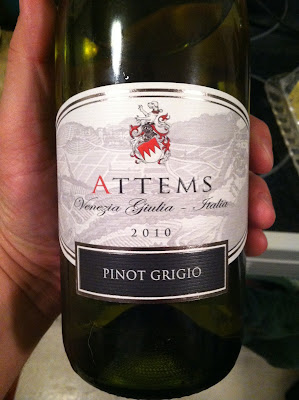 But what I have is the 2010 Attems Pinot Grigio so that's what we will look at. Pinot Gris in France (and Oregon) is Pinot Grigio in Italy. Some producers in Washington and California call it either one of those, but that's beside the point. Most of the time this grape is kind of boring. It's simple, showing citrus and grassy notes alongside stone fruit. Since so much Pinot Grigio is made in large quantities, finding one that's texturally and intellectually compelling can be difficult.

That is, until you plant it in the right place. I would argue that the Collio region of Italy is one of those places. Collio is tucked in far upper eastern corner of Italy, sitting within the province of Friuli Venezia Giulia . Sitting about 430 feet high on a marl and sandstone ancient seabed, the Pinot Grigio grown there can turn into something different, something almost exciting. Given a touch of oak and no malolactic treatment, the wines take on a sense of depth and complexity that satisfies to no end.


I like this wine. After sitting in the bottle for two years, it's developed a pretty mix of lemon pith, asian pear, and tropical fruit aromas. A faint whiff of sea air begins to show as the wine warms up. About 15 percent of the 2010 vintage sat in new French oak for two months. The rest saw four months in stainless steel tanks followed by one month in the bottle.

Tasting the 2010 Attems reminds me of the richness of an Asian pear and a Golden Delicious apple mixed with the tart acidity of green grapes and limes. The finish is gentle and lingering, ending with a hint of oak. About 12.5% abv keeps it classy.


Pair this with roast chicken, cold pasta salads, even pork-and-citrus dishes. Do not serve too cold either, or it will mask some of the more subtle flavors, like hay and minerally rocks.

Suggested retail of $19, but a real world price closer to $13 puts this closer to quaffing-wine territory. I couldn't find the total production for 2010 but I imagine it's a fair amount, well into the tens of thousands of cases. The United States importer is Folio Fine Wine Partners, so Attems should be easy to find in the marketplace.

This was a sample for review purposes.