What were you doing on July 10th? I was meeting up with a group of wine lovers here in San Diego for a tasting! As active as I am on Twitter and Facebook (follow me! @UCBeau), I'd yet to actually meet up with any San Diego wine lovers. While at the 2010 Wine Bloggers Conference, I'd wanted to meet up with Bill (@Cuvee_Corner) but we just couldn't connect. Too much wine or something.

Anyways, before the Conference he and I had tweeted back and forth about holding a little tasting with a small group of wine fans here in town. We'd deliberately picked a weekend after the Walla Walla festivities, to better ensure everyone's availability. That day, I worked a 3:30am-11:30am shift at work, leaving me just a bit tired, but still happy to be meeting and tasting with some fine folks.

Keith (@Brainwines) was kind enough to host the event at his beautiful home in La Jolla. Granted, the day was crappy because of the persistent overcast, the view was still absolutely amazing. Scenery like that is conducive to tasting great wines.

In addition to Keith and Bill, Katie (@lajollamom), Megan (@wineforblondes), and Nanette (@wineharlots) were able to make it and contributed some vino to the festivities.

(img copyright Keith Hoffman 2010)
The theme was that we'd each bring two bottles of wine of the same varietal or region to share. For six or seven people, I thought this might end up being overkill. Looking back, it was fun to taste that many wines but a bit tiring on the palate since there were so many intense, full-bodied reds.

Highlights for me included the Malk Cabernet Sauvignon. Priced squarely in what I consider "Napa Cab Territory" at about $65 per bottle, I had high hopes for them. Keith (@Brainwines) poured the 2006 and 2007, one right after the other. The '06 was texturally very interesting but just felt a bit disjointed, like the wine needed to find itself and would do so in maybe three or four years. 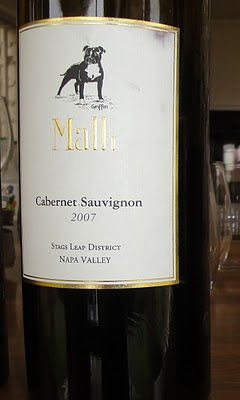 (img copyright Keith Hoffman 2010)
On the other hand, the 2007 was splendid. Everything was so beautifully integrated, it was smooth and supple but had some wonderfully firm tannins across the palate. I loved how the finish just lingered on, notes of bakers chocolate gently dissipating from my palate. I'd highly recommend it, and gave it an A and a very enthusiastic BUY recommendation at the tasting. 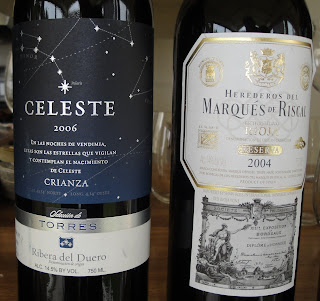 (img copyright Keith Hoffman 2010)
Bill (@Cuvee_Corner) brought a couple of Spanish reds, so of course I was very happy to see them out there for us. My experiences with the Marques de Riscal have been mixed. Way back when one could find the 2001 vintage readily available, it was one of my favorite sub-15$ reds. The 2004 though was very thin and lacking of any kind of texture last time I tried it.

This time though, it was wonderful! Great balance of fruit and tannins, nicely tapered finish and all around smooth across the palate. I'm chalking my previous bad experience up to bottle variation or a flawed bottle itself. The Celeste he brought was also absolutely delicious with some darker, earthy flavors and good, grippy tannins.

Now I know that our group tasted a lot of wine but the ones I mentioned really stuck with me. My own contributions, a JC Cellars Zinfandel and a Fife Zin were polar opposites. the Fife was a 2004, from Redhead Vineyards in Mendocino. It was tired, old, worn out, like a bum's shoe. I hadn't opened one in a while and wanted to see how the wine had held up but it was universally agreed to be the worst bottle there. I suspect my reputation was saved by the JC Cellars, a superb 2006 from the Russian River Valley. Bright, ripe fruit, hints of spice and oak, a bit of crushed pepper and this joie de vivre element that I rarely find in a wine. Right now the JC Cellars is at it's peak and I wish I had another bottle to open up while BBQ'ing for my friends.

(img copyright Keith Hoffman 2010)
All in all, I had a wonderful time. There's another tasting planned for August so if you Tweet, keep an eye out for the #SDTTL hashtag. We'll be changing the format a little bit this time, to actually do some tasting and evaluating. I'm looking forward to it, and to seeing my new San Diego wine friends again. Bill did a lot of the organizational work in this but I'd encourage any of you who have friends who may be intimidated about wines to organize something similar. A casual, fun atmosphere and some good wines can help de-mystify wine to the average consumer. Your enthusiasm will rub off on them and before anyone knows what's happening, you will be competing with them to get the best deals at your local wine store!