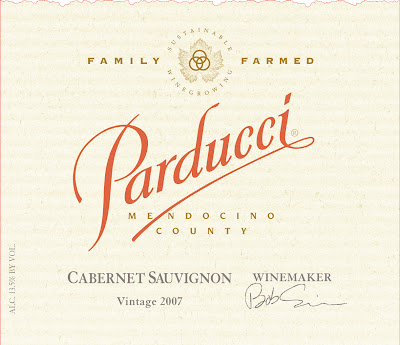 Parducci is well known as both a pioneer and a leader among organic and sustainably farmed wines. They've led the way in becoming carbon neutral and have introduced numerous green methods into the winery setting. In short, an impressive commitment to sustainable agriculture. As admirable as that is though, the fundamental question I hear is this: is organic/sustainably farmed/biodynamic wine better than wine made by more traditional (sic) methods? I don't have an answer to that, ask me again after I've tasted and compared more wines. Just give me a few more years of tasting first!

What I do know is that the 2007 Cabernet Sauvignon is good wine for the money. This was a press sample, but I couldn't find the 2007 on the Parducci website, just the 2006. Not that it's a big deal but I don't know if this was a pre-release or just a website error.

Pouring into the glass with a beautiful garnet color that gets deeper towards the center, the 2007 is 89% Cabernet Sauvignon, 4% Cabernet Franc, 3% Syrah, 3% Malbec and 1% Viognier. Nice aromas of earth, cured meats, smoke and a hint of spice. I feel this is more terroir oriented than the Cabernet I'm used to, which often times focuses on ripe fruit. Mendocino County, with it's cooler climate, usually doesn't reach the ripeness levels of some place like Napa or Sonoma and the resulting wines can express that.

After sitting open for an hour, I took a few sips and jotted my impressions down: "earthy, sticky tannins, a bit rustic, where's the fruit?". Another sip brought: "more of that forest floor/wood note, but almost like a forest fire, very interesting!"

I couldn't find a lot of fruit, mainly a faint black cherry note that was interwoven with a savory, almost soy/teriyaki flavor.

Note: I tasted this wine the next day and found all elements diminished, the forest fire note was more pronounced and the wine simply wasn't as good as the day before. The final rating does not reflect that second day's taste though.

Parducci made a solid Cabernet Sauvignon that showcases some things you won't normally find in an example from California. For a suggested retail price of $10.99, the wine delivers a good experience, if somewhat unremarkable. Above average wine, but just barely so. The fact that it's atypical of a lot of Cabernet puts it at a B- (83 points). Pairing is a bit tricky but the tried and true combo of red meat and Cabernet Sauvignon would be your best bet.