A Rosé of Bordeaux as Spring Approaches

Since spring is approaching for a lot of us..no, seriously, it is!

Ok let's start over and cut to the chase, I happen to LOVE rosé wines and have written about a few of them in blogs past. On February 5th, I took part in the Rosé Rumble with my fellow San Diego Wine Mafioso where we uncorked 12 pink wines and blind tasted them. The results of that tasting are coming soon, I promise.

This blog though is devoted to a wonderfully tart, refreshing rosé from Bordeaux that I had the pleasure of sampling recently. Almost all, if not all of the French rosé that I have tasted in the past is usually from Tavel, along the Rhone river. Those rosé's tend to be predominantly grenache with cinsault and syrah also being mixed in. Of note, Tavel is the sole AOC in France to produce only rosé wine. I've also had some examples from Provence and Languedoc, they've been very pleasing. What I'm trying to say is that this is new ground for me and I have high hopes for the rosé wines of the region.

Some background on why I am reviewing a rosé from Bordeaux, there is a new campaign called Planet Bordeaux aimed at increasing awareness of the wines of Bordeaux beyond those classified growths that seem to command outrageous prices and are out of reach for all but a small group of wine collectors. The fine people behind the Planet Bordeaux campaign sent me some wines from all over the Bordeaux and Bordeaux Supérier regions. Four of those were red, one was white and one was this lovely rosé you'll read about momentarily.

Over the coming weeks I will be devoting multiple posts to exploring this array of wines partly because I believe this is a great way to expand your palate and partly because I happen to be a big fan of Bordeaux in general. One of the themes of the Planet Bordeaux campaign is that it's fun to explore the appellations, blends and color of Bordeaux. They're calling them the ABC's.

So let's get started with the 2009 Chateau La Freynelle Bordeaux Rosé! 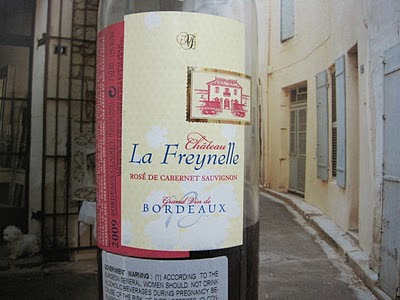 (img copyright Beau Carufel 2010)
Note the label, seemingly designed with the American consumer in mind. The producer is easy to read, the region is clear and presented right below. There's even a sentence telling you what varietal and type of wine this is. "Rosé de Cabernet Sauvignon", stated right under the producer. Little touches such as this will go a long way towards making wines from Bordeaux more accessible to the casual wine drinker.

One of the most interesting things about tasting all those rosé wines with the San Diego Wine Mafia the other day was noting the wide variation of color, from light pinkish-orange all the way to bright ruby. The 2009 La Freynelle is one of the darker examples of rosé I've come across and I admit to being afraid the flavors would be too strong for my palate. Still, it's hard to argue with how pretty the color is when it's sitting in your glass out in the sunlight.

The nose is pure rosé, a melange of ripe strawberries, tart currants, fresh flowers and melon. I felt like this rosé has a personality that is fun, accessible and very friendly. In fact I was mentally ticking off a list of my friends who would enjoy the La Freynelle. Chalk up some points for being a crowd pleaser.

Bright acidity, clean strawberry and hints of sour cherry, rose petal and a bit of fleshy honeydew melon combine to make a savory, mouthwatering wine. Bravo, especially for a suggest retail price of $14. I like the QPR (quality to price ratio) a lot. Each sip finishes with this tingly acidity that makes me want my next sip or bite of food. While the honeydew note does impart a touch of sweet flesh in the form of a thicker mouthfeel. right across the mid-palate, that seems to fit in after the procession of lighter fruits and florals that open the wine's taste.

I don't know how widely distributed the 2009 Chateau La Freynelle is, my hope of course being that it's available everywhere. A google search turned up few leads, so if this wine is truly hard to find, the Planet Bordeaux people are doing a bit of a disservice. However, the silver lining is that I have been informed that this is a style of wine typical to the rosé made in Bordeaux, so another example with the same grape would perhaps yield a similar flavor profile. Then again it could be totally different. I rated this wine a B and a BUY recommendation, especially if you're starting to experience warmer weather or want to change it up in your snow-bound city.


This wine was provided as a media sample by Balzac Communications for Planet Bordeaux.