2007 True and Daring Riesling, Another Gem From the Kiwis

True & Daring is brand new to the American market, debuting here just this past May. I was sent a sample of the only wine they make, riesling, to taste and share with you. This 2007 riesling took a gold medal at the International Wine Challenge in 2010 and a trophy for Best New Zealand Riesling from the same event.

The wine is made by the Dobsons who also own Sandihurst Winery, which itself is relatively new to the New Zealand wine scene, at least in it's current iteration. I read through the website and really like the owner's story. Celia and Hennie Bosman bought the old Sandihurst property in 2005, apparently it was a dilapidated old wreck of a winery. They've set about rebuilding and renewing the entire property. Before moving to New Zealand, the couple and their children had been living in South Africa, which Hennie is a native of. His wife, Celia, is English born and the couple met in Portugal while she was a ballet dancer and he was in the Foreign Service.

I found it remarkable that after only two years, the Dobsons were producing such great wine. This is clear evidence of the meeting point between exceptional terroir and skilled, dedicated people. To make award winning wine in 2007 makes the True & Daring story that much more remarkable. Cold and wet conditions severely affected fruit-set. As a result, the harvest was smaller thank average. Luckily, a period of heat and low rainfall during the midst of the growing season did ensure the grape themselves reached optimum ripeness.

After the 2007 vintage was harvested, the grapes were divided into seven stainless steel tanks to begin fermentation. In each tank, a different strain of yeast was inoculated, with the objective being a final-assembly from each vat of a more complex wine. Fermentation temperatures were kept cool and stopped when the residual sugar levels reached a point so that the final wine would be off-dry, but only just. Since riesling does have a lot of natural acidity, this balance point is critical to a producing a complex, layered wine.

With fermentation complete, winemaker Kirk Bray combined the tanks into one lot, then blended them together on light lees, stirring the wine occasionally over about six months. True & Daring was fine but unfiltered and bottle-aged for 24 months before being released. In all, only 5,450 six packs were produced. 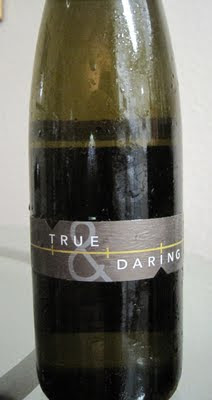 Sourced entirely from the Annabrook Vineyard in Nelson, New Zealand, the 2007 True & Daring comes in at 12.2% abv. The name comes from the philosophy that that the winery would stay true to one grape and be daring enough to take on only Riesling, as the wine they produce.

I poured the 2007 True & Daring into my glass with a high level of excitement. Of late, a lot of riesling has been gracing these pages. I wrote up the stellar 2009 Mt. Beautiful Cheviot Hills riesling last month, and also was able to taste through a superb lineup of Finger Lakes rieslings just a few weeks ago. I for one hope that this trend continues, bring on the Austrian and German rieslings next! Oh and more from New York and New Zealand too please!

The aromatics of the True & Daring were awesome, lots of ripe peach mixed with hints of petrol and a stony, hard burst of minerality. Citrus notes, like a diced up grapefruit also showed themselves, next to a bouquet of white flowers. The complexity of this wine is something to be marveled at, I kept sniffing my glass, putting off taking a sip. If you know me, you know that's a sure sign I am happy with what I'm drinking.

As young riesling goes, this True & Daring also ranks highly for it's complexity on the palate. Maybe those four years in the bottle really did a lot to enhance the wine, I believe that to be the case. An absolute joy to taste with ripe mandarin orange, white peach, and a laser beam of minerality through the mid palate. The acidity contributed the structure, I could feel it all over my palate. This wine is very sure of itself, is comfortable in it's own skin. I got the sense that the winemaker basically lets the fruit do the talking, with only minimal guidance. My favorite part might have been the finish, which had a crisp, dry quality that lent itself to pairing with food.

Next time I go out to sushi, I am going to have riesling and if a sushi place happens to have New Zealand riesling, I'll be incredibly happy. All in all, this is kick-ass wine. It's got great quality, complexity, and a cool story behind it. Since the 2007 True & Daring was just released, finding it is going to be a bit of a challenge but I would recommend contacting Gordon Palmateer and seeing where you can find it in your area. At a suggested retail price of $35, the price is spot on for what you get. Will a $35 New Zealand riesling sell in the United States? I wish I knew. Would I buy a bottle or two if I saw it for sale at my local wine store? Yes. Easily an A- and STRONG BUY recommendation. Cheers to awesome juice from the Kiwis.