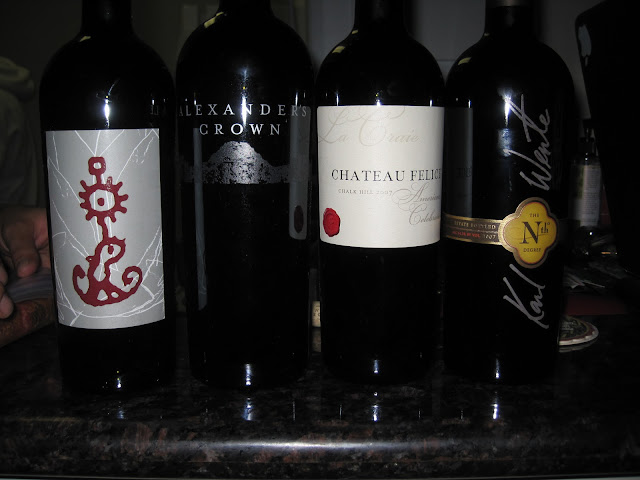 About a month ago I took part in a tasting of four California cabernet sauvignons withTasteLive and group of fellow wine bloggers. I've been fortunate enough to participate in other TasteLive events, the format being that select bloggers around the country are sent samples to taste and talk about, live. TasteLive's website allows each blogger to log in and appends each tweet with hashtags relevant to the tasting.

For the wineries and PR groups, TasteLive represents a great way to spread each brand across a huge chunk of the wine-drinking, new media-using demographic. It's also a smart way to build background buzz about wines and/or regions that the PR groups are trying to build awareness for. For us bloggers, well, let's face it, we get free wine to taste and talk about..Things we already love doing to begin with.

The event last month was titled "Luscious Hedonisms", and was intended to showcase four different cabernet sauvignon growing regions in California. We were sent these bottles of wine a few weeks before the tasting, then on October 11, we all gathered at our respective homes and swirled, sniffed, and sipped our way through some expensive wine. I think some of us spit too, though I confess to not spitting a couple of the wines. The lowest priced bottling was around $49, the highest coming in close to $75. Those are, of course, suggested retail prices.

Here are the wines:

2007 Chateau Felice La Craie American Celebration: From the Chalk Hill AVA, this is actually a blend of cabernet sauvignon, merlot, and cabernet franc. It's what we here would call a "Meritage", "we" and "here" being totally irrelevant of course. The Chateau Felice is tight upon pulling the cork, but soon reveals aromas of leather, plum, baking chocolate, and herbs. Out of the four wines, I feel it had the most tannic presence, but backed up the firm tannin with gorgeous flavors of cassis, black cherry, baseball glove, and a bit of dusty oak. I rated this wine a B+, it's very, very good and worthy of your cellar. Suggested retail: $50. Alcohol: 14.3%


2007 Krutz Cellars Stagecoach Cabernet Sauvignon: Ok, first off, why the hell would Krutz even want to send a bunch of bloggers a 95 point (W.E.) cabernet sauvignon? It's suggested retail is $75, so the score:price ratio is right (for once). This was by far the best wine of the tasting, and you can find it for $65 at good retailers. The bouquet is all Napa mountain fruit, brimming with cassis, black cherry, herb, dark earth, and hints of vanilla. Despite four years of age (two in bottle) this wine is still a bit tannic which only means it needs more time in your cellar to become even more delicious. Gorgeous plum and blueberry, vanilla cocoa, dry desert herb, and leather all balance out very nicely on the palate. Wonderfully integrated despite it's young age, the Krutz Stagecoach has many years left. I gave this wine an A and STRONG BUY for those who want a cabernet that reminds us why Napa Valley is one of the best places on earth to grow that varietal. 14.8% abv.


2008 Rodney Strong Alexander's Crown Cabernet Sauvignon: Another $75 srp California cabernet sauvignon, this time from Alexander Valley. Wine Spectator rated this a 93 points, so we have another highly rated wine given to a bunch of bloggers. And again, I am somewhat baffled. That said, I'm more than happy to taste and talk about wines with high scores. Unfortunately, I disagree with the 93 point rating, mine is closer to a B+, or 87/88 points. This smelled of ripe blueberries, sweet red cherry, and oak. After a few hours I was able to detect some bits of minerality but they were lost behind the over-extracted fruit flavors which themselves had to contend with massive amounts of vanilla oak. The palate left me feeling much the same, this wine feels big and tastes intense. More of the ripe berry fruit and a big dollop of vanilla oak are battling it out. I think with time this might mellow out and allow the intriguing mineral element to come play but for now, it's just not my thing. PASS recommendation, especially at $75. 15.5% alcohol. (wow!!)


2007 Wente "The Nth Degree" Cabernet Sauvignon: The last wine of the evening was from Wente, a producer I generally avoid because I've always found their wines to be heavily oaked and lacking structure. Their winery is located the same area they get their fruit from, the Livermore Valley AVA. The 2007 The Nth Degree was heavily oaked as usual, but luckily there was also some firm tannin that acted to restrain the vanilla and cocoa flavors of the oak barrels. Like the Rodney Strong, I smelled a lot of vanilla, cocoa powder, ripe berry fruit, and the barest hint of minerality. Across the palate, more of those extracted berry flavors and vanilla oak, framed by the tannin I mentioned before. Luckily the Wente cabernet is also balanced nicely, so those of you who enjoy a California cabernet sauvignon that is made in the style that California is now departing from need not despair! The suggested retail is $60, teetering on the edge of the "overpriced California wine" precipice. I feel the quality is high, but it's too extracted and still too oaked for my palate. B+ and a PASS from me. If you want this style, don't pay $60 a bottle, despite the obvious quality here. 14.3% alcohol.

Tasting four brawny California cabernet's is one thing, but tasting them in a realistic setting means that you need food to accompany the wines! Cabernet and steak go together like Beau and Burgundy, so it was time to cook up three pieces of tri-tip. Becky was in town helping me pack for my move to Oregon, and my buddy Justin came over because he likes free wine and to hang out. Here are some pictures of our meal: 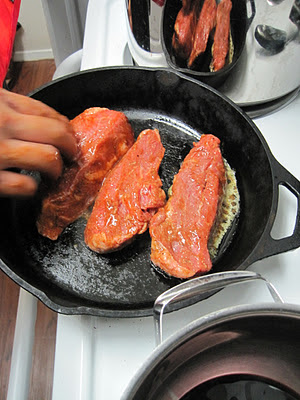 Tri-tip steaks marinated with a spicy Cajun sauce for a few hours, then put into my cast iron skillet to broil in the oven. I could have gone with rib-eye or New York Strip but those are pricier options and these were the perfect size, one for each of us.

Some people wonder why steak or red meat pairs so well with tannic red wines, one of the reasons for this is that tannin binds well with proteins in red meat, creating a nice synergy of texture and flavor. Another reason, the actual taste of good beef, a "meaty" taste, pairs with flavors like herb, earth, and even spicy black fruit. 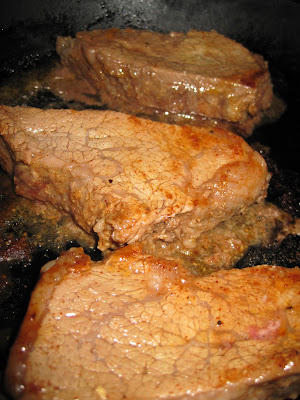 Here you see the tri-tip steaks fresh out of the oven, ready to be enjoyed with the different cabernet's. When I pair steak with wine, I tend towards reds with firmer tannin levels opposed to fruitier reds like merlot. Cabernet fits that bill perfectly - if you pick correctly. Forgive the rant, but too many California (Napa Valley in particular) cabernet's are so fruity and over-extracted that their flavors completely overwhelm any food you try to pair with them. As a result, I look for cabernet from Washington state, Mendocino and Lake Counties, the Sierra Foothills, and France. That said, the Krutz paired brilliantly, as did the Chateau Felice. 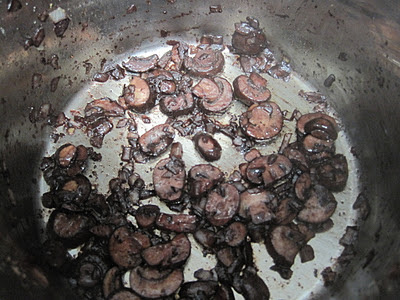 I have to confess, I reduced the mushrooms in the 2007 Krutz Cellars cabernet, which was so good that I knew it would ensure the mushrooms were awesome.

They were, and spooned onto the steaks created a delicious match of flavors. Again sticking with the more tannic reds of the tasting, Chateau Felice and Krutz, earth flavors found in mushrooms are complementary to those wines.

I wish I had the finished meal to show you, plated and all, but I don't. That's a major fail on my part, but I can leave you with this: the meal was damn good.

Cabernet Sauvignon is versatile, it can grow in many places on this planet and the finished wine can run the gamut from austere to overly sweet and tasting of vanilla sawdust. My tastes run towards the former, and lucky for me and those with palates like mine, there is a shift towards more restrained styles going on in California. Each wine we tasted was high quality, of that there is no doubt, unfortunately the latter two were simply over-made wines. They aimed for a flavor profile that is increasingly out of sync with today's wine drinker. Time will tell if in future vintages, Rodney Strong and Wente's top offerings begin to resemble those of producers like Krutz, Round Pond, and Elizabeth Spencer.

The TasteLive event itself was a lot of fun, even if I wasn't able to tweet as much as I'd hoped. Juggling hosting duties, taking notes, and interacting with people on Twitter and TasteLive was a daunting task, one that I need to work on. That said, I want to thank the TasteLive folks and the winery representatives for taking the time to get this all up and get us bloggers the wine, as well as sticking around to answer questions and give us good data on what we were drinking.

These wines were media samples for tasting purposes.