December 7th is an auspicious day, on it we Americans remember Pearl Harbor, the Japanese sneak attack on America that plunged us into World War II. This day is one for rememberance and hopefully, one for looking toward the future as a time when perhaps we won't be fighting each other anymore.

Fast forward 70 years later, and December 7th was the first ever "Occupy Syrah Day", founded in part by Bill from Cuvee Corner Wine Blog and Shawn from A Wandering Wino. Riffing off the "Occupy Wall Street" theme may not have been popular with some people, but they're party-poopers and not worthy of our time. The point here was to build awareness, through social media, for a grape that here in the United States at least, has a bad rap.

Syrah, once destined to be the "next big thing" according to such prestigious publications as Wine Spectator, never has lived up to those prognostications. Pinot noir came along and kicked over the proverbial sand castle, relegating a grape made famous in the Rhone Valley to something whispered about by wine geeks and pumped out as commercial grade plonk by the Australians. Luckily, the past several years has seen a resurgence, led domestically by outstanding examples in Washington and California. Overseas, Chile and France have come on strong (France..again) while Australia has languished in a sea of  cheap shiraz. Unfortunate, but things are finally starting to change in the land of the Kangaroo, as the two selections I was sent will attest to. 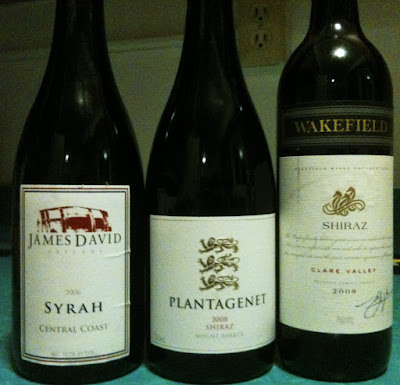 2006 James David Cellars Syrah Central Coast: Medium-dark purple in the glass. Right away, aromas of campfire and bacon fat followed by earth, black pepper, and blackberry/blueberry. This is a big, bruiser of a syrah with tons of pepper on the front palate, leading into a core of dark fruit flavors and oak through the mid palate. The finish brings more crushed pepper and a firm dollop of oak as the this syrah winds down. It's clear that the 55 months spent in oak barrels are influencing the wine. The spices come back on the finish too, it's like swallowing a teaspoon of ground peppercorns. Nothing subtle about this syrah, it means business. Best paired with very full-flavored foods. 15.7% abv. $NA.

2008 Wakefield Estate Shiraz Clare Valley: Pours a dark red-purple in the glass. On the nose, a touch of brettanomyces leads into a bouquet of bacon fat, blackberry, smoked meat, blueberry, and vanilla oak. The palate profile consists of ripe black cherry, blackberry, eucalyptus menthol, tobacco, some peppery spice, and more vanilla oak. I like the tannic structure and in particular, the nice finish. This would be a pretty tasty summertime barbecue wine to serve with all manner of charred red meat. $15 is a good price for a shiraz that has a bit more complexity than we expect from that price point. 14.7% abv.

2008 Plantagenet Shiraz Mt. Barker: Pours a very dark red in the glass. Aromas of smoked meat, campfire, red berries, white pepper, herb, and a touch of heat form a pleasing bouquet. Dried basil and thyme, red cherry, menthol, subtle oak notes, and a bit of tannin create an excellent suite of flavor and texture on the palate. I am very surprised at how good this shiraz is, perhaps $20 is the entry for quality Australian shiraz. The balance is something unexpected and the wood doesn't clobber you over the head, despite it enclosing the wine for 20 months. No need to cellar this wine any longer, it's drinking extremely well right now. 14.2% abv. $20.

Participating in the #OccupySyrah day was a lot of fun. While some people lack a sense of humor and were not enthusiastic about the name, I feel it was a lighthearted stab at a topic which we all are aware of. Bill and Shawn did a good job spreading the word and I was pleased to see multiple PR and marketing groups send samples out for bloggers to sample and share. In a small but important way, that was indicative of the power of social media.

For my part, I'm going to keep drinking syrah, be it domestic or imported. I love the complexity that's possible with a well-made syrah, where you truly can feel the power, restrained. In 2012, I hope more wine lovers take the time to explore syrah and share it with their friends.