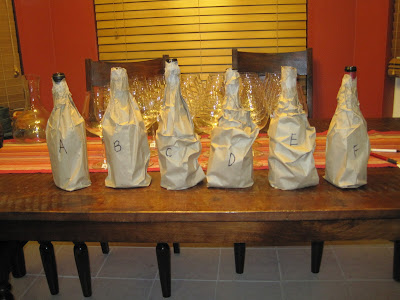 The theme again was Oregon Pinot Noir, but the vintages and regions were up to us. As it happened, every pinot noir was from the Willamette Valley and the vintage spread was 2004-2010. Next time I am going to try to bring an older bottle and see if anyone mistakes it for a Burgundy.

I've been pretty down on 2009 Oregon pinot noir because most examples I've tasted were too ripe, flabby, and high in alcohol for my tastes. 2008 offers better age-ability and the 2007's are drinking fantastically well despite the many critics who gave the vintage a poor score. As an aside, I feel that the issue with the 2007 vintage illustrates another flaw in our continued reliance on supposedly "expert" wine critics who make proclamations which then have a very real impact on the sales of those wines.

Critic-bashing aside, I've been also very keen on 2010 pinot noir, because I love the acidity and more delicate fruit flavors compared to 2009. In the interests of integrity, I did try my best to throw my preconceived notions out the window for this blind tasting. It helped that the wines were in brown paper bags. 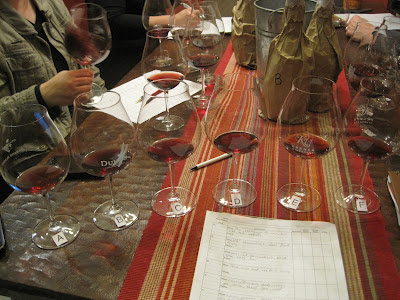 Below are the tasting notes for each wine, in order of tasting. I'll include my rankings, subjective as they might be, at the bottom of this post. The notes below are mostly unedited too, in the hopes that you'll see my thought processes as I tasted each wine. 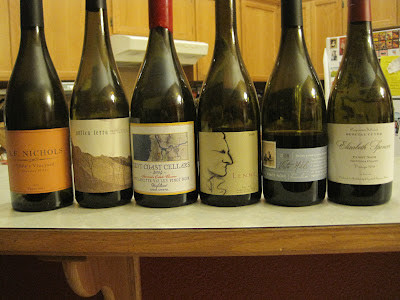 1. 2010 A.F. Nichols Lillie's Vineyard Dundee Hills:
N: Aromas of grape stem, red cherry, and hints of herb and cola. Might be a touch of VA on the nose too, almost medicinal in nature. Smells young, this might be a 2010 or lighter-style 2009.
P: Light but with great acid, more of the grape stem quality. Red cherries and soil come through, very clean tasting. Good finish, a little bit sudden though. Lots of potential, could be great in a few years.

3. 2009 Antica Terra Willamette Valley:
N: Earth and red fruit, smells young! Vibrant acidity but also some noticeable oak. Baking spices, something like damp forest floor too. Intriguing!
P: Ripe, rich style. 2009? Raspberry and strawberry fruits give it good acidity but it's just a bit too fleshy for my taste. Oak notes come through, not as strongly as on the nose. Easy drinking, good wine.

4. 2008 Vista Hills Tusculum Estate Dundee Hills:
N: Smells bad, like a skunk. Also some meaty, minty aromas. The skunky smell is distracting for me. Puzzling. Has some boozy thing too, an alcoholic burn in my nostrils.
P: Puzzling, there's a nice Oregon funk note, but also something almost Brettanomyces-like. Dark fruit and bramble on the finish. Tastes better than it smells but it's kind of rough going.

5. 2009 Lenne Yamhill-Carlton District:
N: Cherry/Strawberry candy, cherry pie, grape stems. Baking spices and lots of wood! Wowie.
P: Very ripe mouthfeel, interesting acidity, seems to weave in and out of the palate. Cola, cedar, and a peppery finish. Not that bad but it's not that good either. Most interesting aspect is the acidity and it's effect on the palate.

6. 2008 Elizabeth Spencer Special Cuvee Sonoma Coast:
N: Cherry preserves, a touch of alcoholic heat, but a lightness too. Ripe red fruits dominate but behind that is a spicy component which was immensely pleasing.
P: Light red fruits, it's muted compared to the aromas. Lower acid levels than the other wines, it is probably the California wine. Clean, easy drinking, touches of oak around the periphery.

Thanks for making it all the way down here! Here's my list, in order of preference. I've linked to cellartracker.com too so that you can get an idea of what the greater wine drinking community thinks too.

In terms of rating, I held the Elizabeth Spencer out because it wouldn't be fair, but if I had to rate it, the third spot would be appropriate. Out of all the wines, the Antica Terra surprised me, and while I feel it is overpriced, the quality is undeniable. I'd never had Lenne or Vista Hills wines before, but know them by reputation, and I've heard good things about both producers. Stylistically, they're not what I look for in an Oregon pinot noir and I still struggle to figure out what that skunky smell was in the Vista Hills.

Blind tasting is a great way to find out where your bias lies, as long as you make the effort to toss out preconceived notions. While we don't blind-drink our wines, for educational purposes, blind tasting is perhaps the best way to get acclimated with a region new to you, or even to stay sharp on a region you're familiar with. In addition to all of that, blind tasting with your friends is a blast, as you all finish your own observations, the guessing game becomes a really fun activity. What blind tastings have you done recently?