Have you ever had the grape inzolia? I have not, to the best of my knowledge. The varietal is grown in Sicily, among other places, and creates a wonderfully light, aromatic white wine. Thanks to the awesomeness of Twitter and my friend Melissa, I found out that the grape is blended with other native varietals including: Greciano, Catarratto, and Grillo. Also it's used in making of Marsala, which old people drink and everyone else uses to cook chicken Marsala with. 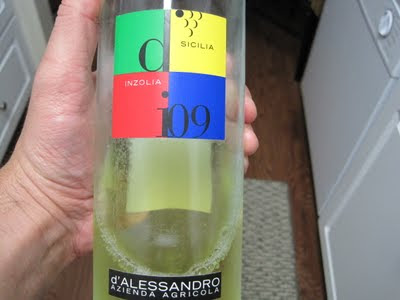 I was sent a sample to taste recently, from d'Alessandro winery via Colangelo Public Relations. The d'Alessandro winery is relatively new, dating back to 2006 Giacomo d'Alessandro left the family tourism business to make wine. It's located in the southwest of Sicily close to the city of Agrigento. According to the press materials I received, d'Alessandro wines are available in New York City, California, Massachusetts, and Florida, along with some other selected markets across the country. The importer is Vinifera, who import some of the very best Italian wines available into this country. I have sold a lot of their wines during my near-decade on the retail side of the industry.

Enough with the chit-chat, time to look at what's in my glass!

Pale with a very small amount of green tint, reminds me of a pinot grigio from the Venezie region, way up at the top of the boot. Oh stepping slightly off topic for a second, why the hell is there so much cheap, insipid pinot grigio being lapped up by consumers today? That's one thing that bugs the hell out of me because the grape is capable of making some truly delicious wines, yet I see the $5 shit selling like hotcakes. At that point, why bother? Just add alcohol to water and you're set, because the taste will be pretty much the same.

Back to the wine in front of me...

Beautifully scented nose that reminds me of pineapple, lime juice and fresh Granny Smith apples. I'm really enjoying the aromatics and it's easy to close my eyes and imagine a cafe in Sicily right on the seashore, sipping this wine under a springtime sun while I ponder a citrus-marinated grilled white fish resting on a bed of polenta. Seriously, it's such an easy thing to picture and that mental image just feels right. Or I could be waxing poetic about a dream vacation I really want to take. Which do you think?

Since I don't have much (if any) experience with white wines from Sicily or the grape inzolia, placing the d'Alessandro into the proper context is difficult. I know we wine bloggers aren't supposed to admit things like that but I did anyways. I'm trying to evaluate this wine in the context of a light, food-friendly, inexpensive white wine.

In that regard, it succeeds...In spades. If acidity in a white wine can be elegant, the d'Alessandro embodies that theory. The wine has life, a zippy seam of acidity that mixes around with toasted almonds and lime juice. Around the edges of those two primary flavors comes some weight, a glycerin component not entirely different than what I've discovered in some wines from Soave. Vibrant, ripe apples on the finish make up the sweet fruit component while that seam of acid gently fades away, giving a very pleasing linear feel. The 2009 d'Alessandro Inzolia kicks ass. Probably the main reason this inzolia remains so fresh is because it sees no malo-lactic treatment or oak barrel aging, rather just four months in stainless steel tanks and two months in bottle before it is released.

I used wine-searcher.com to see if I could find anyone in the United States selling the 2009 d'Alessandro Inzolia, but that didn't work out. From what I could glean, the wine sells for about $15-20 but might be a touch less depending on your local taxes. Price aside, this is a B+ and a SOLID BUY recommendation. Pick up a bottle and pair it with fresh fish, sushi (YUM!!), light pasta dishes (basil pesto?!) and even vegetarian pizza. Just goes to show that the Italians truly do know how to make wines that are meant to be enjoyed with food.


This wine was received as a sample for review purposes from Colangelo Public Relations for d'Alessandro Winery.
By Beau at 1:30 PM