Last month I was offered the chance to take part in a live, virtual tasting featuring the red wines of the Finger Lakes region in New York. I've done virtual tastings in the past and they've always been a great learning experience. Usually I get to explore a new (to me) region as well as further train my palate in wine evaluation. I jumped at the chance to participate in the Fingers Lakes Red Wines virtual tasting because I am intrigued by what is coming out of New York right now. The region is well known for its rieslings but less so for the reds.

There were eight of us from the media participating, along with a representative (usually the winemaker) from each winery also on hand to take questions. For an hour we media types were able to ask questions and learn about each wine while we tasted them one by one. 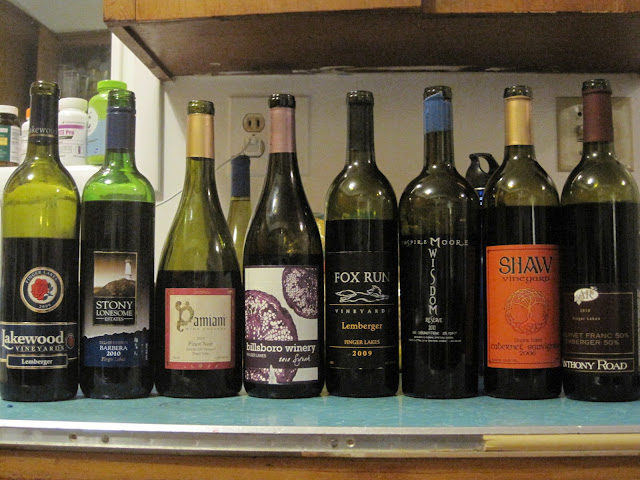 We tasted in two flights, four wines a piece, with the first four listed above being in the first flight and the next four in the subsequent flight. I can see the reasoning behind this, since Lemberger is lighter than say syrah or cabernet sauvignon. Breaking up the eight wines also worked out for logistical reasons, but that's not really important to this blog.

At first I intended to post the tasting notes for each wine, but that was before the virtual tasting. Afterwards, I didn't really want to even write a post but feel obligated to do so.

Here's the problem: Out of those eight wines, one was enjoyable. The 2010 Billsboro Winery Syrah was pretty nice, and more importantly it was fault-free. Every other wine in the tasting had problems; volatile acidity, brettanomyces, baterial contamination, over-use of oak, and under-ripe flavors being chief among them. My impressions were echoed by other well known wine bloggers. Of course, there was the obligatory sample-whore praising every single wine, but those kinds of wine bloggers are in every tasting. Still, the fact that almost every wine was staggeringly difficult to drink really put a damper on the excitement.

Since I don't know much about New York wines, let alone the reds, I made some inquiries about why we got this lineup. One person I spoke to said: "The wines in this tasting don't necessarily represent the region's best reds. Not by a long shot.". Ouch. That's a strong indictment of the wines, said politely.

I tasted each wine over the course of three days and the Three Brothers Barbera improved a little bit. Therefore, along with the Billsboro Syrah, I found two (one and a half, really) in my first tasting experience of red wines from the Finger Lakes. To say that's an inauspicious start is an understatement.

There are many other producers in the Finger Lakes region and I am not drawing any conclusions as to the overall quality, because that would be unfair. Stylistically, I think I understand what the producers are going for, and in my opinion the flaws cover up what could be some very interesting flavor profiles. I also realize this article isn't going to win me any fans, but I feel compelled to write about my experience.