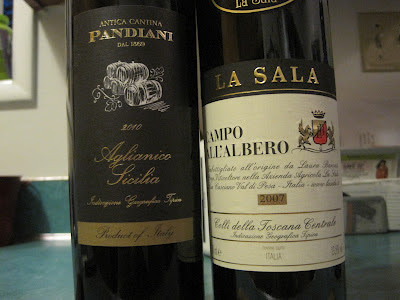 WinePassionate.com is a relative newcomer to the internet-wine-sales-scene. That hasn't stopped them from assembling a good selection of wine from Italy, Chile, California, and Argentina. Right now the focus appears to be Italy, with a range of wines from all across the "boot", and I think that's a good thing. Pricing is another nice part of the winepassionate.com site, with the wines ranging from about $8 all the way up to $46. They recently reached out to me with the offer to try a couple of their wines.

Aglianico is one of those obscure grapes that has a lot of history but not many wine drinkers in the U.S. drinking it. Sure, there are the ever-growing cadre of wine geeks who do seek it out, but the general public doesn't seek it out with any regularity. Perhaps that should change, just the way riesling went from relatively obscure to the darling of sommeliers (hint: it makes their jobs easier) all over this country. 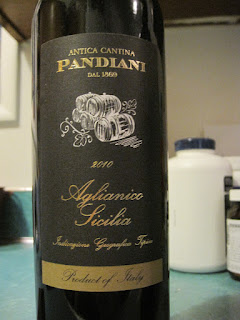 When the chance to sample an aglianico came up, I was eager to get my hands on it. This one, a 2010 by Pandiani, is from the island of Sicily. It saw no oak, instead spending six months in steel tanks before being released. Aromas of dusty soil, currants, and plums waft up from the glass. The palate is nice, with well-integrated tannin, spices, ripe fruit, and enough acidity to keep the "flab" factor from coming into play. I paired it with some pulled pork sandwiches and that worked out beautifully. This aglianico is on special for only $12 right now, if you're interested click here to buy. (I make no money from any sales made, just FYI)

As Jay-Z says, "on to the next one..." and so it goes. I was also sent a $46 bottle of wine from La Sala. It's a Super Tuscan, which tells us that this wine contains grapes other than sangiovese, and is from Tuscany. In the case of the 2007 La Sala Campo All'Albero, 85% cabernet sauvignon and 15% sangiovese. After 12 months in small French oak barrels, the Campo All'Albero underwent an additional six months aging in bottle before being released. 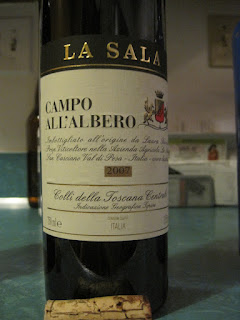 "So what?", you might say. And rightfully so. Often that kind of aging information is meaningless without some context. Consider this then: we know cabernet sauvignon, when young, is a brute and needs oak to mellow out it's tannin and acid levels. Sangiovese can be the same way, therefore it's wise to age Super Tuscan style wines in oak barrels for some time before you release them.

We can therefore conclude that this wine, while from tannic grapes, will have the benefit of almost five years of age and some of that time in oak. Accordingly, I found the La Sala to have aromas of roasted nuts, oak, pepper, red currant, and cherry. On the palate it's still youthful, with tannin that firmly keeps the ripe fruit flavors in place. Nicely balanced and with a pleasantly drying finish, I kept wanting veal or other red meat.

$46 isn't cheap, and as you can see, this wine didn't blow me away, but it's damn good stuff and compares favorably to Super Tuscans that cost twice as much. If you're interested, click here to purchase. (Again, I make nothing from any sales)

In time, I hope the WinePassionate.com team expands their selection, with the caveat that it continues to focus on smaller brands not always available here. They can fill a great niche, given a bigger list from. Oh and they do a neat thing where every four bottles equals free shipping. It's a great way to spend under $50 and get four bottles of delicious wine, like the 2010 Pandiani Aglianico.

These two wines were media samples from the website.