Being bored and hungry usually means that the fridge will yield up a meal or at the very least, a way to make a meal. Tonight was no different, after spending some time organizing my 2010 Wine Bloggers Conference notes and tweeting with some people, I felt the familiar gnaw of hunger in my stomach.

Standing in front of the cold, white thing in my kitchen, I realized that with a little work, something resembling a meal would be on the table in about half an hour. I spotted some Smoked Andouille sausages, an onion, shredded cheese, garlic, salt & pepper, cayenne pepper, pasta and some pasta sauce. Without realizing it, Trader Joe's would be providing every ingredient for this dish tonight. 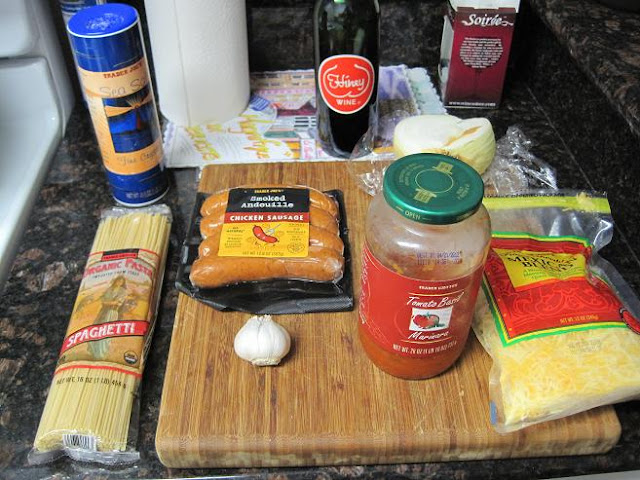 What to do? I remember reading a while back about some weird spaghetti/chili dish out in Cincinatti, that idea spawned what you see in the picture above. Seriously. That's how odd my thought processes can be sometimes. In any case it was time to begin the prep. Set the water to boil, get a pan hot (more on that later), get the sauce warming in a small pot. Chopping onions reminds me that I need to take some cooking classes and learn the proper way. Anyone want to pay for them for me? Didn't think so. 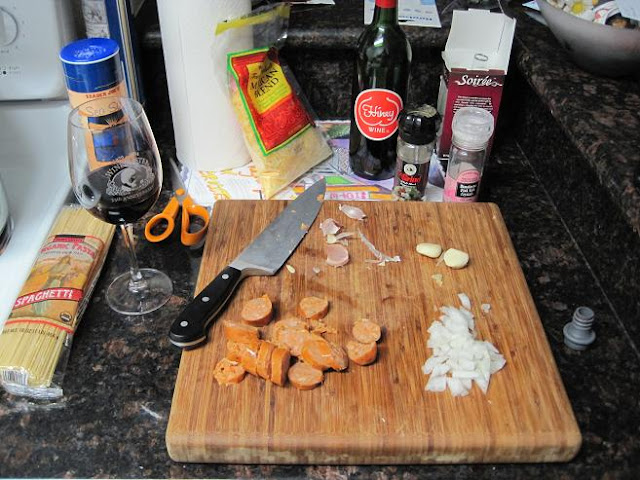 Yes, I'm making a mess. Yes, I'll have to clean it up but I tend to clean as I go, hopefully that comes across as efficient and not just dumb. Notice the rough cuts on the sausage? That knife sucks for cutting sausage. It cut everything else just fine though. Oh and I did pour a glass of wine to taste. It was the Big Red Hiney I got as a gift from the wonderful Cheryl at Skylite Cellars (@SkyliteCellars). Opened it list night while doing an informal test of the Wine Soiree (@WineSoiree). The test was a smashing success by the way. Another blog entry will give you more information.

Anyways the time came to put the sausages in the hot pan, which I decided to spray with some oil first. Big mistake. Note to self: do not set your stovetop to medium-high to brown sausages. Immediately my place filled with whitish, burning, choking oil smoke. There goes the smoke alarm, raising a god damn racket. Shit! Pull pan off stove, cringe, inhale smoke, turn stove down to "4". Choke a bit, realize the world is not in fact ending and move on with life. 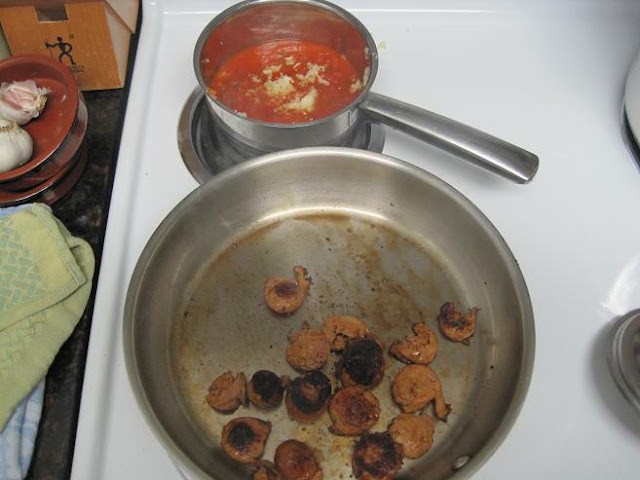 That was stupid of me. The pan was still really hot when I threw the sliced sausages back on, the result is what you see. No biggie, just a note for the next time I try something like that. One of many notes I had to make during the events of this evening. It was time to add in the onions, which I did but failed to note on camera. By this time the sauce was simmering away nicely so I added in the garlic and cayenne. Visions of an Arrabiata style sauce floated through my head. Seriously, I know jack shit about cooking as you can tell.

Steam rising from the big pot indicated the water was ready for it's date with Spaghetti. You might call it a hot date? Come on, that was a bit witty! Putting the nearly-incinerated sausages and slightly browned onions (at least I did that right!) in with the pasta sauce got me excited. One you got past the smell of burnt oil and charred andouille, the aromas were tantalizing! Or maybe I was just getting drunk. 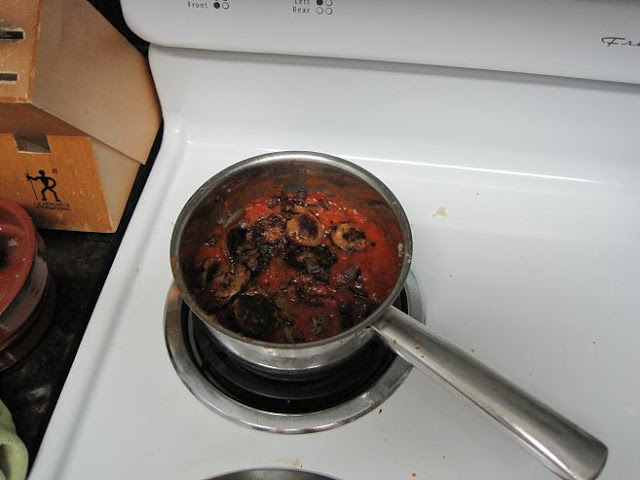 Doesn't look like much, does it? I know, it looks pretty gross, but I'm not a chef and have no concept of creating pretty food. At this point during my culinary adventure the pasta was about done and the sauce was boiling up nicely. My intent was to get all those flavors in little pot to mingle together, like the Catalina Wine Mixer! (Stepbrothers reference). I quickly drained the pasta water out, threw the spaghetti back into the pot and dumped the sauce in with it. Why? Last week I read that since pasta cooks from the outside in, when you add something back into it after it's cooked, it'll absorb the flavors. Cool stuff! 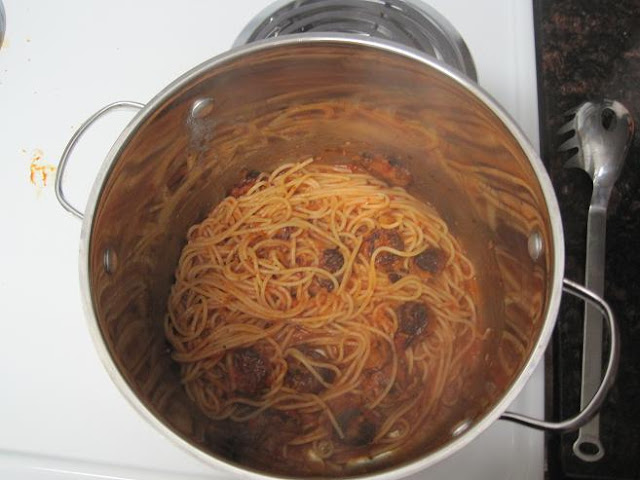 That picture makes my dish look something like deranged spaghetti and meatballs. Oops! The smell was still pretty good despite the sausages surviving nuclear winter courtesy of my inability to find "medium high" on my stove. 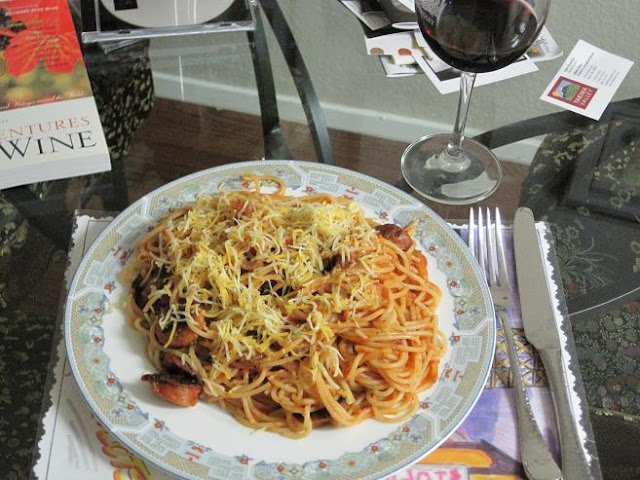 Plated for your pleasure. The shredded cheese blend was Sharp Cheddar, Monterey Jack, Asadero and Queso Blanco. I chose it versus Parmesan because I wanted something a bit creamier to offset the spice of the Andouille. That part of the dish worked out. Texturally, I liked it because you got the lightly al dente pasta, creamy cheese and slightly (ok very) crispy sausage.

Next time, don't burn the damn sausages, use a touch more tomato sauce, less garlic and a different form of pasta. That's what I learned tonight.