Part of the way to Walla Walla..Sitting in Pasco.

This is my first attempt at live blogging while I'm tasting wine, but you're more than welcome to call it a somewhat half-hearted attempt. As I write this, I'm sitting in the airport restaurant of Pasco, Washington. It's called Florentyna's and I like their view of the tarmac.

I decided to be safe with the food side of my meal and get a bacon cheeseburger. Hopefully I've also been a bit daring since I ordered a glass of 2007 Boomtown Syrah to go with said burger. Let's be honest here, I've been up since 5:15am and haven't had anything beyond three glasses of OJ. It was all I could do to not have a Bloody Mary while sitting at San Francisco International and watching Italy lose their World Cup match. 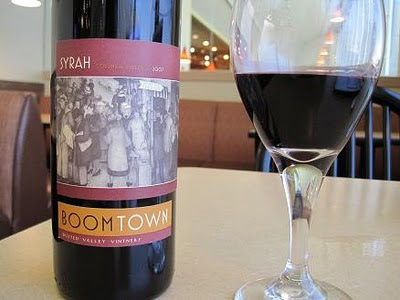 But as always we're drawn back to wine and that's the emphasis of my blog. The 2007 Boomtown smells big, but rather than being intense, it's lush. The ripeness reminds me of blueberry and blackberry preserves right out of the jar. Then doused in vanilla. And there's a bubbling pot of milk chocolate next to it. Some heat flits into your nostrils (grrr that word again!) but you have to dig deep to find it.

On the palate there's more of that ripeness, a lush, silky character washing across your palate. I'm also finding touches of pepper but hardly any tannin. Wait! There are those tannins, soft and silky! I nearly mistook them for the influence of oak. Don't worry, oak makes it's presence known too, manifesting as a toasty, vanilla flavor that seems to pop up everywhere in your mouth. I wonder how long this has been open? I'd ask, but I don't want to be rude.

Not much of a finish, everything just seems to shut down and that's it, you have to take another sip to get more flavors. Kind of disappointing actually, I was hoping for more especially given how nicely the various flavors mesh together. I'll say this, the wine is pretty well integrated, even if it doesn't linger for too long.

I did a quick google search and found the Boomtown retails for between $11 and $15. The Boomtown brand is a second label of Dusted Valley Vineyards, perhaps you could call it their more "value-oriented" wine. Still, for the price it's pretty tasty stuff. I'd give it a solid B and suggest you give it a shot if you see it on the shelf somewhere.