6100 Year Old Wine, What Would Parker Score It?

Upon checking my email this morning, I found a press release from the fine people at the UCLA Newsroom regarding the recent discovery of the oldest wine-making equipment ever found. In an article just published by the Journal of Archaeological Science, a team of UCLA researchers analyzed the discovery of some artifacts found in a cave in Armenia. A grape-press, fermentation vats and storage jars were all unearthed within said cave, with grape must, seeds, and grape vines found in the surrounding soil layers.

From the article: "This is, so far, the oldest relatively complete wine production facility, with its press, fermentation vats and storage jars in situ," said Hans Barnard, the article's lead author and a UCLA Cotsen Institute archaeologist.

I'm fascinated by history and of course wine, so this is of particular interest. Apparently the small village in Armenia by which the cave is located happens to be known for it's wine-making, locally at least. This wasn't day to day wine though, but rather wine used for ceremonial purposes. Evidence for this comes from the surrounding area which was full of tombs and grave sites. 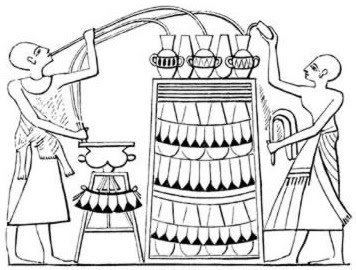 Previously, the oldest evidence for wine-making had come from the discovery by German archaeologists in the tomb of the ancient Egyptian king Scorpion I. Dating back some around 3150 B.C., that evidence consisted of grape seeds, skins, dried pulp and imported ceramic jars covered on the inside with a yellow residue chemically consistent with wine.

It's also important to remember that wine-making back then wasn't nearly the same, but the basic procedure has remained roughly the same for the past six thousand years or so. Often other things like resin (where we get retsina wines), honey, flowers and spices were added to the wines of the day, to make them more palatable.


In the case of the Areni-1 discovery, the equipment was rudimentary but somewhat close to what's used today. Take for example the 3 foot by 3-and-a-half foot basin, complete with a thick rim that would have contained the juices and a drain system which let the juice fall into a vat below it. Sounds an awful lot like a press, one that you climb into and stomp the grapes using your feet. Those are still used today in some parts of the world, including California. You can bet this stuff is the real "natural wine" that a lot of people are hollering about these days.

Analyzing the chemical composition of the grape remains at the site led the researchers to discover that the grapes were of vitis vinifera genus, the same genus responsible for almost all the wine-grapes today. Granted there are exceptions like the Norton grape here in the United States, all the good wine we drink comes from vitis vinifera. A DNA sequence will tell us exactly what species that grape is and I for one would love to try a wine from it. You'd be tasting a little bit of history!

Finally, Hans Barnard said: "The fact that a fully developed wine production facility seems to have been preserved at this site strongly suggests that there are older, less well-developed instances of this technology, although these have so far not been found."

I for one hope that we find more ancient evidence in the coming years, discoveries like the one mentioned here only further our fascinating relationship with wine (and with fermented beverages) that seems to have been going on since nearly the dawn of recorded history.