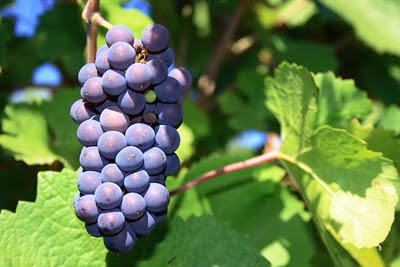 (img src http://lashahull.files.wordpress.com/2010/05/pinot-noir-grapes.jpg)
Another wine from Trader Joe's. This is one of their private label wines, of which there are multiple designations (and price points). The Petit Reserve is one of the cheapest of the "Trader Joe's" labels, usually somewhere between $5.99 and $8.99 per bottle. At the upper end are the "Grand Reserve" wines, around $12-14 a bottle. One can find gems hidden in each segment, but most of the wines are for me, pretty boring. There's nothing necessarily wrong (from a technical standpoint) with these wines, they are just not that interesting for a wine geek to taste.

The usual story given out is that somewhere in the world, a famous, well known producer needed to sell some of his wine and heroically of course, Trader Joe was there with a briefcase of cash and a custom labeling facility. Joe promised not to disclose who the producer was, but did promise to take all xx,xxx cases off said producer's hands and re-brand it as Trader Joe's wine. In trying to track down who does produce a lot of these private label wines, I've often come across shell companies, fake wineries, and even good old Fred Franzia's Bronco Wine Company. As for the 2009 Petit Reserve Pinot, I didn't do a lot of digging but was assured the wine was from a top Pinot Noir producer making "big labels" up in San Luis Obispo.

Interestingly, and perhaps telling, was the fact that 4.8% of the wine is actually Souzão. Grown primarily in Portugal, Souzão is used in the production of Port wines, often to add color and flavor. Makes sense to add such a big, dark, heavy grape to Pinot Noir, right? No, it doesn't. But I'm not the big name producer or Trader Joe's so I don't make the rules here.

Poured into my glass, this is a somewhat pale Pinot, especially for California and even San Luis Obispo. The cooler climate keeps acidity a bit high and allows more fruit nuances of raspberry and sour cherry to manifest. In the Petit Reserve Pinot, the nose gives hints of those fruits along with oak (presumably this is barrel aged) and some alcoholic heat. At 13.7% the alcohol is smack in the middle of the Pinot Noir I've been tasting for the past few years.

I think I could taste added structure the Souzão gave this wine, in the form of a firm tannic backbone that interacted with the acidity. More of the soft vanilla, sour cherry and bits of raspberry were playing on my palate too. More of the alcoholic heat too, which disappointed me to some extent. No strong flavors and nothing that jumped out, this is a weak wine structurally.

The finish was straightforward and brief, nothing lingered as if trying to draw out the experience. As I sat and thought about this wine, I was left with the singular notion that it didn't have much soul. I couldn't detect much terroir influence, rather this seemed to be a cobbled together wine. In essence, it was there to be sold and consumed without much thought. I graded it a C and Do Not recommend you try it, despite the very consumer-friendly $5.99 price tag.

If you must try this, pair it with a pizza or something equally simple. Even then, I'd rather open a Chianti or Merlot.