**BREAKING NEWS** For the next 24 hours: September 14-15th you can get FREE SHIPPING on your purchase at Von Holt Wines, just use the promo code: BBR-VHW on checkout. This is your chance to try the amazing wines including what I reviewed here. Well worth a visit, don't ya think?!

About a month ago, during the course of tweeting up about wine and specifically, California syrah, I started tweeting with the Von Holts, who own Von Holt Wines. They produce pinot noir and syrah from a small winery in Belmont, CA. After some tweeting, one of the two Von Holts, Chris or Pam, offered to send me some samples to try. At the time I was on a bit of an Oregon pinot noir kick, so the chance to sample some syrah and pinot from this state was something I jumped at..

Boy am I glad I did! After getting four wines from the Von Holts, I laid them down for a few weeks to settle down, as I usually do. Fast forward and we're already into September and Labor Day weekend. After consuming Oregon pinot noir rosé and a red Rhone the past few days, I needed something to ground me in California once again.


Von Holt Wines to the rescue! 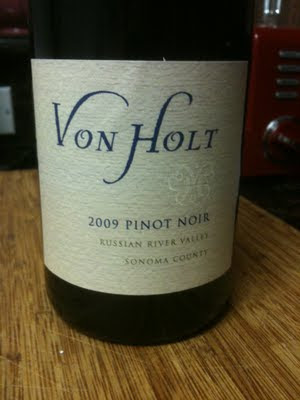 I opened their 2009 Russian River Valley pinot noir. It's made up of fruit from two vineyards, Suacci and Ketcham. Picked on September 19, 2009, this pinot noir almost made it two years from picking to my mouth. Neat! For us wine geeks, there are four clones present: Pommard, 828, 115, and 777. This particular pinot spent 11 months in French oak, 25% of that was new oak barrels. Alcohol is a refreshingly "low" 13.8%. Compared to the 14.7% pinot rosé and 15% Rhone I had recently, this is in another league entirely.

The color is beautiful, a light, translucent ruby red that pales towards the meniscus. It looks like pinot noir should, without the darker purple hues that come from additives like Mega-Purple or the addition of syrah or valdigue.

Aromatically I picked up ripe red cherry, some warm baking spices, and a nice forest floor component. The red fruit dominates, especially as the wine opens up. There is a touch of kirsch that seems to blend well with a hint of green grape stem. I think this is a classical Russian River Valley bouquet, elegant and fun at the same time.

My first sip brought a vibrant red cherry and pepper note, which I found incredibly appealing. The acidity is clean and pure, each flavor follows the line of acid along your palate all the way to the finish. The 2009 Von Holt RRV has a lightness of body, and the way that an earthy, truffle note takes over from the cherry flavors is almost perfect. I wish there had been a bit more of the earthy truffle note though because the red cherry is so ripe and pure that it does tend to dominate. The pinot had a wonderful finish, with the acid keeping things light and fresh while the flavors slowly faded away.

The first of four wines from Von Holt that I tasted, this set the bar high, but I have no doubt I will enjoy the rest. For a suggested retail price of $38 on the website, this is well worth the money. I suspect it would be around $8 cheaper at local wine stores, making it a screaming deal for pinot noir of this quality. It should age nicely until around 2017 or so, but is perfectly good to drink right now. A-, STRONG BUY recommendation.

I'd love to try another bottle of 2009 Von Holt with a bacon-wrapped salmon or some marinated grilled chicken, but this would also stand up to something like a rack of lamb provided you didn't go too crazy with the herbs.

Visit the Von Holts on Twitter and you can purchase the 2009 Von Holt Russian River Valley pinot noir on the website.