Another "varietal day" has come and gone. By all accounts (read: measured metrics across social media channels) this "#CabernetDay" was a huge success. Just like last year, I participated by opening some cabernet sauvignon and tweeting about what I was having. Unlike last year, I invited some friends over to hang out, eat food, and enjoy the samples I was sent. Also, I was lucky enough to get some wines from Hahn Family Wines and Sequoia Grove to sample. My Cabernet Day was set up for success, to borrow a term from work.

My buddy Brian and his girlfriend, Teenie, came by to hang out and sip some wine while enjoying spread of delicious food I prepared. Since the wine was cabernet, that naturally called for meat, lots of it, the red kind. I stopped by my local grocery store to get some bone-in New York Strip, ground bison, bacon, aged cheddar, and various other bits and pieces. Brian brought over some cheese, apples, grapes, and carnitas; we were set to gorge on food and wine. 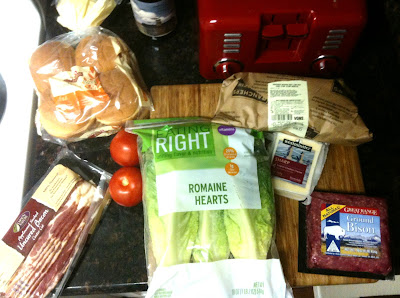 There you can see some of the food I bought for the Cabernet Day tasting. Instead of ground beef, I went with ground bison because it's a leaner meat with different flavors than cow. The point was to see how gamey, earthy flavors paired with cabernet sauvignon, something I have done before and enjoyed. Bacon is a necessity in most kitchens, there was no way I was making gourmet cheeseburgers without it. 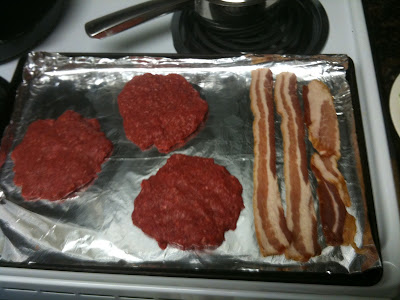 Hand formed bison burgers and bacon about to go in the oven, and the festivities are about to get started! Since bison is so lean, I added in an egg and about half a teaspoon of barbecue sauce in an attempt to keep meat moist. Why did I cook the patties in the oven? Good question, I think it was an experiment to see if I could keep the juices locked into the meat more than if I'd used a frying pan.

Now I can talk a bit about the wines I was sent. From the Hahn Family Wines portfolio I was sent three samples and I decided to open another sample, from Sequoia Grove, as a fourth bottle. Here they are: 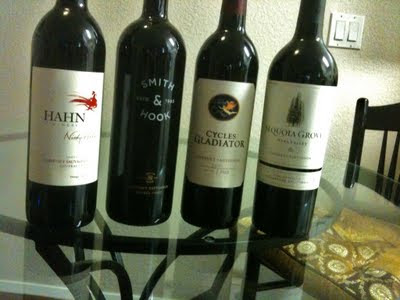 2009 Hahn Winery Cabernet Sauvignon Central Coast: A nice, simple, medium bodied cabernet. Good balance of ripe red fruit and spices wafted out of the glass. Not much tannin again, but what's there does help with the sweet cherry and plum flavors. A blend of 90% cabernet sauvignon and 10% merlot. Still, too flabby and a bit hot for my tastes. Solid finish, good length and there's a hit of roasted coffee at the end that keeps this wine fun. B-. 14.5% abv. $12 suggested retail price. 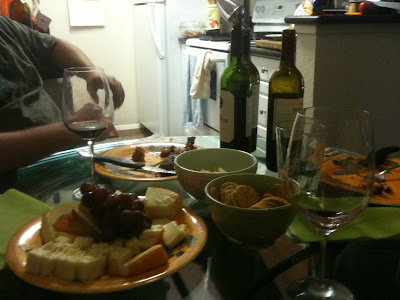 Kudos to Rick Bakas for promoting this event and getting so many people on board. I had a great time cooking food for my friends and sharing wine with them. Additional thanks to Mark Buckley of Hahn Family Wines and Jeff Donegan of Kobrand for sending me samples. #CabernetDay turned out to be a smashing success, and I loved seeing the discussion from around the world. While I still feel that the various "varietal days" are getting out of control, I certainly won't stop opening bottles and sharing them with my friends, because that's really what these days are all about.

Those of us who write about wine, sell wine, make wine, and educate about wine should be the ones leading the charge to get more Americans to drink good wine on a regular basis. We do that by showing enthusiasm, passion, humor, and patience in our interactions with those just beginning to explore wine.