I had never tasted a pinot grigio from Austria before today. The majority of my experience lies with cheap Italian examples like D'Aquino or Mezzacorona. Those seem to be watery, almost tasteless wines without character or soul. On the other hand, I have had limited but very positive experiences with Oregon pinot gris and even some from California. Of note, if you ever see the 2009 Elk Cove Willamette Valley pinot gris out there, buy it. Superb stuff.


Back to Austria and pinot gris. From a country well known for Gruner Veltliner and Rieslings comes this wine. Truth be told, I am not sure what to think of it. The label says "Trocken", which on the sweetness scale means this is a dry wine with low (but still present) residual sugar. My palate though, notes a distinct sweet note, albeit brief, but so very noticeable. I don't mean for that sentence to sound negative, on the contrary this wine is making me think about how to describe it.


The name Kracher is perhaps the most famous in Austrian winemaking both for the tireless work Mr. Kracher did in advocating Austrian wines and the critical acclaim his wines received from critics like Robert Parker. After the "anti-freeze scandal" of 1985, where some Austrian winemakers were found to be adding diethylene glycol to bulk wines in an effort to enhance the sweetness everyone basically stopped importing wine from there.. This destroyed the reputation of Austrian wines and it took about 15 years to recover. Only in 2001 did the export levels surpass those of the pre-1985 scandal's. 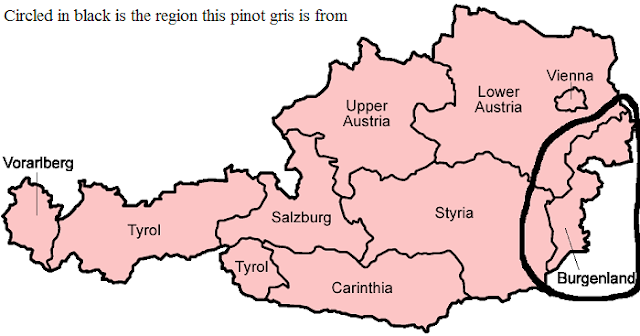 (img via wikipedia with edits by Beau Carufel)
Please ignore my horrible MS Paint work, I wanted to give everyone a better idea of where this wine came from. Burgenland is a long, narrow state in Austria, on the border with Hungary. The 2007 Alois Kracher Pinot Gris Illmitz was harvested during October after what the Austrians called a "Winemakers Year", meaning that the vintners had a lot of challenges to overcome in the vineyards and wineries. Here's a Wine Spectator vintage summary to get a better idea of how the year went in Austria. 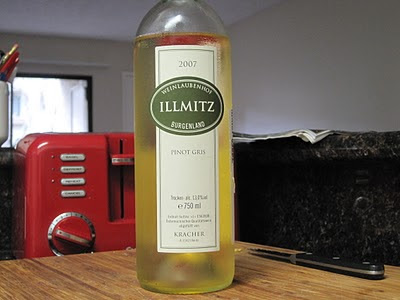 Pinot gris is almost always pale to the point of looking a bit like colored water. This is no exception, when held under light against a white background, the wine is clear at it's edges. I like that though, for me a refreshing change of pace from what I usually drink.

The nose is sweet smelling, with a tickle of acidity. No oak of course, the 2007 Kracher spent seven months in stainless steel. As I sat trying to pick out specific scents, the closest I could get was thinking about how warm the wine smells, like a kitchen were someone has the oven on and is baking something sweet. Maybe a fresh apple tart, the kind with a bit of cinnamon on top and a butter crust that is flaky and awesome. The apples notes remind me of the golden delicious variety. Another quick swirl and I found something akin to a bouquet of summer flowers. Based on the nose alone, if I were to suggest a personality type for the Kracher, it would be "cheery".

The taste, an initial sweetness quickly washed away by the acidity inherent to pinot grigio. I felt that the apple taste was stronger on the palate but with less of the supporting things like the butter crust and cinnamon. Instead, it tasted like apples and something like pineapple. Maybe even a touch of grapefruit that was there representing that acidity. I noticed at first, when the wine was really cold, it had a marsanne-like oily texture which disappeared as the temperature rose. For the curious, I tasted this at a few degrees below room temperature.

At a suggested retail price of $15, this is a tasty wine at a good price. A quick peek at wine-searcher.com has it listed for as low as $11 or so, making it a killer deal and a QPR winner. I highly recommend anyone who enjoys crisp white wines to buy a bottle or two. Do like I did, pair it with Mexican cuisine. I finished off the 2007 Alois Kracher Pinot Gris with some chicken tacos topped with salsa, what a delightful pairing! Originally I had planned to taste the Kracher with Asian food but that didn't work out so I was forced to improvise. An easy B+ and BUY recommendation, for me a cool, interesting introduction to Austrian pinot gris.

This wine was a press sample for review purposes.