Why Yes, There is Syrah in Your Pinot!

Do winemakers put syrah in their pinot noir? Two answers, either yes or no, but that doesn't show the lively debate within the wine community about this phenomenon. I think I first got a glimpse of pinot with syrah in it about five years ago, when I was tasting through some Sea Smoke wines. They were unlike anything I'd ever had before and reminded me of the lush fruit a merlot can sometimes have. Sure there was spice and some acidity but the wines just seemed to go in a different direction than previous pinots I'd tasted. In that same year I tasted some Radio Coteau wines and was told on no uncertain terms that the winemaker did indeed add syrah.

Fast forward through about five years of palate development and wine education and I present to you a picture of a wine tech sheet sent to me by someone whom I trust implicitly. They acquired this and while we discussed the merits of pinot from California versus Burgundy, offered to share evidence that at least some people are messing with pinot. I've never tasted Three Knights before, it's a wine that Trader Joe's sells and is probably one of their "made up" labels where they buy fruit or juice from big name producers for pennies on the dollar. Still, at least the winemaker for this stuff is adding syrah and God knows what else. 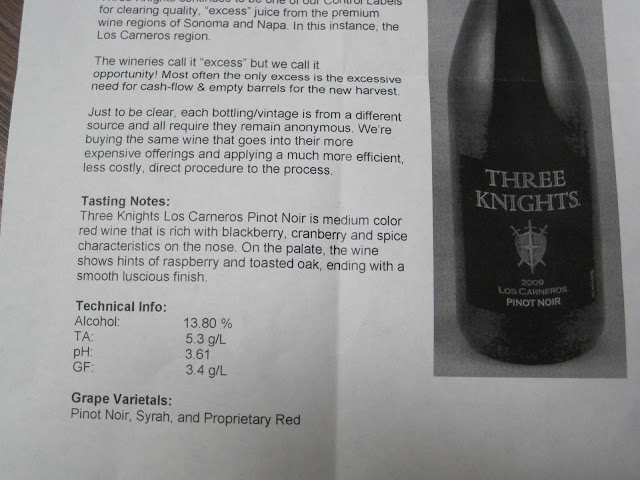 I think a legitimate question is "who cares what grapes are in the wine as long as the law is followed?" In this, I do agree - to an extent. The "but" is when a person drinks something like the Three Knights and thinks that is what pinot noir tastes like, without knowing the other ingredients. Not having tasted the Three Knights, I can't say if it's what I'd consider a true expression of pinot or not, but most likely it isn't, given my experience with pinot at that price point.
Wine labels should list what grapes are in the wine, among other things. I've always felt that way, not because I want to give away winery blending secrets, rather because I want to know what I am drinking. In a perfect world I suppose the laws would specify that the grape grower be named on the wine labels too but I suspect companies like Bronco Wine Co. and maybe even Cameron Hughes would not approve. And really, do we want to read the back of a Charles Shaw label and see that 99% of the grapes come from the Interstate 5 corridor? 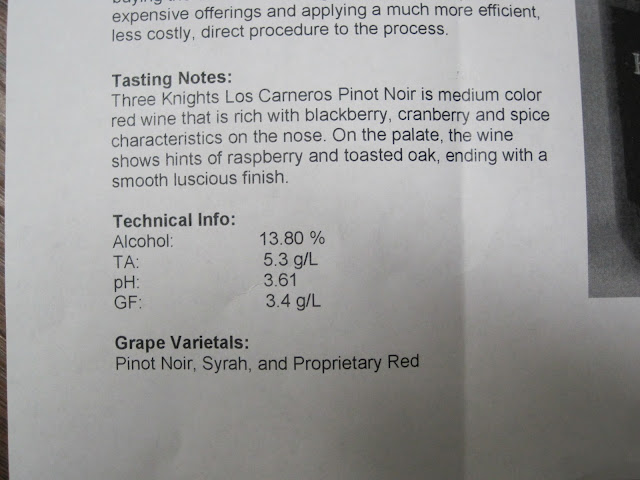 The evidence is clear, there is at least one pinot noir in California that has syrah in it. Well, if you could Radio Coteau, there are two. One cheap, one expensive. My bet is there are many more that have at least a small ( under 5%) amount of syrah in them, others probably jack it up to 15% to get that riper, richer mouthfeel.