I've tasted almost all the samples that Planet Bordeaux sent out to me in February, as my scores indicate, they sent out winners. Charlie Sheen would be proud. The latest Bordeaux I sampled was the 2008 Chateau Pey La Tour, an entry-level from the lowest classification of Bordeaux wines. Recall that Bordeaux and Bordeaux Superieur are geographically the same, however to have the "Superieur" added, the wine must meet higher requirements than a basic Bordeaux.

As far as vintages go, the 2008 has not gotten huge press of say the 2005's or 2009's. Considered a tougher, more hands-on growing season, 2008's are starting to show up on your retailer's shelves. As is typical, the lower tier wines are first to market, followed over the course of the next 18 months by the progressively higher-cru Chateaux. Wine Spectator wrote a free report on the 2008 growing season, click here to read through it. 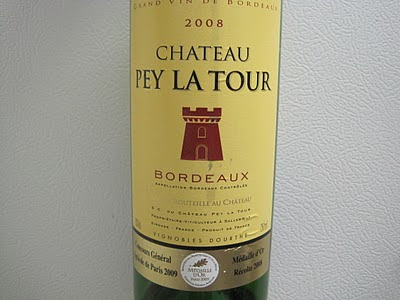 The 2008 Pey La Tour is 77% merlot, 14% cabernet sauvignon, 8% cabernet franc and 1% petite verdot. Out of this cuvee, the cabernet franc shows up in spades on the bouquet and the merlot dominates the palate. Bright berries, pepper and nice dark earth are all nicely integrated and waft out of the glass enticingly. Lots of powdered chocolate, earth and a fun mixed-berry preserve flavor combine nicely. I also got some plum and a touch of oak. The finish goes on impressively considering the wine's price.

Best to open and decant or use a Vinturi on this wine, I think I've recommended that for all the Bordeaux and Bordeaux Superieur I've reviewed so far. After a few hours of open time, the flavors mingle nicely, begging to be shared with a meal. French wines are almost always great for food, the 2008 Pey La Tour is no exception and I had a great meal of bacon-wrapped bratwurst, fingerling potatoes and sauteed spinach with the wine.

Another winner from Planet Bordeaux, and a winetastic value, to quote my friend Bill from Cuvee Corner. Around $13 per bottle and apparently widely distributed throughout the United States, Chateau Pey La Tour's little gem is well worth the price. I gave this a B and a BUY recommendation.

Some upcoming blogs will be featuring two wonderful wines from Soave, and coming up on April 2nd, a dessert wine tasting! That's got me all giddy inside, a lot of great people sent me some awesome samples to try with a variety of desserts. Stay tuned!

This wine was received as a press sample from Planet Bordeaux via Balzac.