Los Vascos is one of Chile's oldest wineries, and the (Lafite) Rothschild's of Bordeaux fame have been investing in the facility since 1988. They've modernized nearly every aspect of the winery from the equipment to the vines and even the bodega on the property. According to the website, accessible here, Los Vascos makes eight different wines, ranging from their high end "Le Dix" red blend to a rose. Interestingly enough, I couldn't find the Los Vascos Reserve Cabernet on the website, just a Grand Reserve and a regular cabernet bottling. 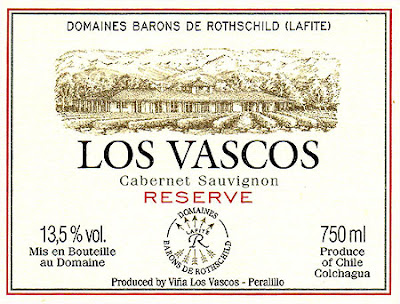 Dark purple color, paling slightly towards the outer edges. Very much what New World cabernet looks like. This shade of purple tells me the wine is young and probably full flavored. Usually, I mean.

Earthy, herbal nose with some green notes too. Not quite the dreaded green bell pepper that a lot of people find in Chilean red wines though. This is something else, like a partially dried bundle of herbs. Sweet blackberries lurking in the background as well as black cherry and a vanilla cassis scent also present. A slight touch of heat but it's nearly unnoticeable. While the description may sound interesting, I have to say that the bouquet was muted and seemed to lack a lively quality that I've had in other Chilean wine.

Nice spices on the front palate mixing well with some firm but generous tannins. Again the earthy components show strongest for me, the herbs also playing a part. Dark chocolate seems to hide any fruit, only occasionally did I get a taste of blackberry.  Interesting chalky flavor too and not much oak for me. I like the finish, it has a nicely tapering effect. Although there's some heat, the balance is reasonable considering the 14.0% abv.

Prices for the 2008 Los Vascos Reserve Cabernet Sauvignon range all across the map from about $20 to a listing of $10 on one website. It's imported by Pasternak, a very reputable company that brings in a lot of outstanding wines from all over the world. If only they'd send me samples to share with you!

I can't help but feel like this wine was rushed to market though, it feels unfinished and a bit disjointed. Perhaps another two or three years in bottle (impractical at the winery at this price point) would help tame the rough edges a bit. Still, the wine is on the market right now and therefore gets a C+ and a PASS recommendation. I feel like there are better options between $10 and $20 from Chile right now. My wine-friend Keith over at BrainWines tasted the 2006 and 2007, each of which he rated very favorably. If you see those, perhaps give them a try and avoid the 2008 for another two years.

This wine was a media sample.