Big House Wines was spun off from Randall Grahm's Bonny Doon Vineyard back in 2006 after it started to get really, really big. Mr. Grahm decided to refocus on smaller production, boutique wines and let Big House Wines and Pacific Rim become separate entities. Big House was bought by The Wine Group, makers of such gems as Corbett Canyon and Franzia. Meanwhile, Pacific Rim operates as something of an independent subsidy of Bonny Doon Vineyard. Since then, Big House has become known for Big House White and Big House Red, usually wines that are cheap ($7) and made from many different varietals blended together.

While certainly not bad wines, there's also nothing particularly remarkable about the usual vintage of Big House White and Big House Red. I lump them into the category of "barbecue wines", or wines you'll buy multiple bottles of for your backyard barbecues because you don't want friends drinking your good stuff. Traditionally, Big House Wines avoided using more well known varietals like chardonnay and cabernet sauvignon. This was because Randall Grahm went a different route and if you've tasted any of the Bonny Doon wines, you'll realize his route is one of excellence and awesomeness. 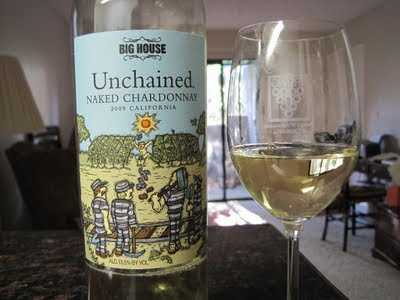 That changed though, at least with the 2009 vintage. Winemaker Georgetta Dane decided to create a chardonnay and a cabernet sauvignon. I'll talk about the chardonnay here and the cabernet in a blog post to follow.

The 2009 Big House Unchained Chardonnay is 100% chardonnay from vineyards all over California. It's harvested and then ferments in stainless steel, seeing no oak at all. The wine doesn't undergo malolactic fermentation either, so I don't expect to find any buttery or overly creamy elements. That's confirmed when I smell notes of apple and pear, lemon peel, and a touch of sweet cream.

Tasting at room temperature, to get a sense of how acidic the wine is, was a good idea (for once). The acidity is quite good, framing up really pleasant notes of pear and red apple along with just a touch of something like pineapple. I'm really appreciating the fact that no oak was used, as well as no malolactic fermentation. This is my style of chardonnay, more fruit driven than oak-influenced.

While the alcohol is 13.0%, I didn't detect much heat at all. Maybe a bit on the finish, where I've always been more sensitive to alcohol spikes, but still a good wine. Unfortunately I wish the finish had been longer, the Unchained chardonnay seemed to end rather abruptly in a bit of a disjointed mass of ripe pineapple and acid. Other than that though, I was happy with the aromatics and initial mouthfeel.

I can happily give this wine a B-/B and a BUY recommendation. For $10, it's a really good way to get a crisp sipping white at a wallet-friendly price. On a hot day this would pair superbly well with a Cesar salad or shrimp cocktail. Since Big House made about 30,000 cases, you can easily find this at your local grocery store or liquor store like Total Wine or Beverages and More.

This was a media sample for review purposes sent by Folsom and Associates.