Taking Some Mystery Out of Dessert Wines

Dessert wines can make even an experienced wine connoisseur nervous. While most people know of dessert wines, there's something of an air of mystery to that category. Some of that air might be cultivated, as way of elevating this class of wine above others *coughCHAMPAGNEcough* but for the most part, dessert wines are a non-threatening, delicious, fun way to cap off a memorable meal. In February I had the brilliant idea to create a couple of blog posts detailing my experiences with dessert wines and that in turn would hopefully spur some dialogue and exploration on your end.

I reached out to some contacts in the wine industry and soon had a wonderful assembly of dessert wines to taste and write about.I was lucky enough to have samples from Austria, Greece, Spain, and Oregon sent to me for this tasting. A special thanks goes out to the Brand Action Team, Balzac Communications, and Seven of Hearts winery for generously sending me some amazing wines. 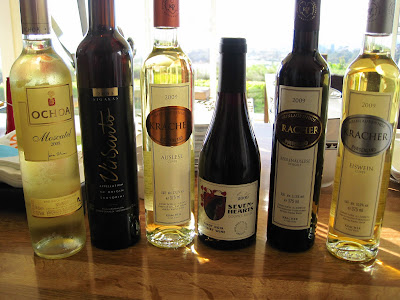 The next step was to figure out some food combinations, in an effort to make this more of a "real world" kind of test. Since I had invited my buddies Keith and Bill to participate, I figured why not put them to work procuring some tasty, sugar-laden goodies for us? They each contributed various pastries, chocolate bread, and a special Brazilian Mousse de Maracujá dessert while I contributed some panna cotta, one of my all time favorite desserts (and I brought the wines). Our plan was to try the wines with various desserts, both to mimic more casual dishes and also to throw desserts into the mix that you may have at an upscale restaurant.

On the next page (see the link at the bottom of this one) I'll go more into detail with tasting notes about each wine as well as the dessert pairings that I found to be very interesting and fun.

If you're with me so far, good. Some of you might be wondering what exactly a "dessert wine" is. Definitions vary around the world, as do names. The Aussies even call them "stickies", how quintessentially Australian! At their heart though, the vast majority of "dessert wine" is sweet in nature. This is often due to elevated sugar levels left over after primary fermentation has been completed, called "residual sugar". Two of the main reasons for those elevated sugar levels come from the way the grapes are grown and harvested.

In wines from Sauterenes and Barsac in Bordeaux, the sauvignon blanc and semillion grapes are allowed to succumb to "Noble Rot" caused by the botrytis bacterium. This rot concentrates the sugars in the grape by drying it, allowing for a sweeter wine to be made. Alternately, a method practiced in Canada, New Zealand, and Austria (among other places) produces what's called "ice wine" where the grapes are allowed to freeze on the vine, thereby concentrating their sugars so that when pressed, the resulting juice is lower in water and higher in sugar. There is no hard and fast rule about what method you have to use to produce sweet wines though.

During the tasting, we had wine from Sauternes as well as an ice wine (eiswein) from Austria. There were also several others; a muscatel from Navarra, an Auslese made from chardonnay and welschriesling (not regular riesling), a vin santo from Santorini, and a Beerenauslese made from the zweigelt grape. Obviously we were trying totally new varietals in the form of dessert wines, an awesome way to get acquainted with them.

My friends at Seven of Hearts in Oregon contributed a bottle of their dessert port, made from pinot noir grapes grown in a couple of vineyards in the Willamette Valley. Pinot noir, you ask? I asked too, and at the very least this is a fun experiment with the varietal. The Coupe's Cuvee was made in the traditional style, with some brandy being added at a certain point to arrest the fermentation and preserve some residual sugar. That's also how Port is made, one of my all-time favorite drinks!


Below is the list of dessert wines we tasted on April 23rd: